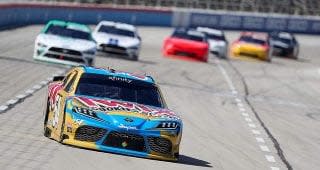 Kyle Busch was disqualified from an apparent victory in the NASCAR Xfinity Series on Saturday after his Joe Gibbs Racing No. 54 Toyota failed post-race inspection at Texas Motor Speedway.

Busch’s car was found out of compliance with the height requirements, according to the NASCAR Rule Book. That ruling elevated Austin Cindric, who was the second driver to take the checkered flag, to his third Xfinity Series victory of the year in the My Bariatric Solutions 300. It also sent Busch’s No. 54 to last place in the 37-car field.

The last driver to be disqualified from an Xfinity Series win was Denny Hamlin, whose No. 18 Joe Gibbs Racing Toyota was also penalized for failing height requirements last August at Darlington Raceway. That promoted apparent runner-up Cole Custer to victory.

NASCAR competition officials introduced a tougher deterrence system into the rule book before the 2019 season, one that included disqualifications for significant rules violations.