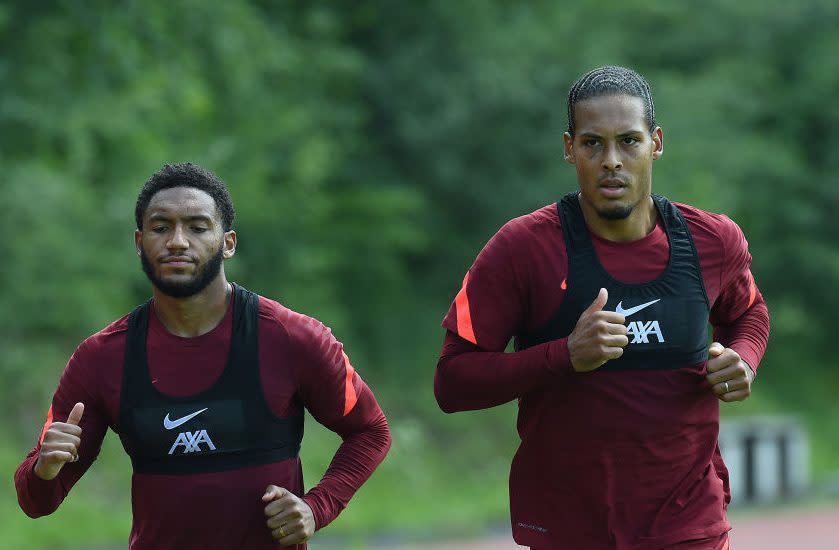 Jurgen Klopp has explained the current situation with Liverpool duo Virgil van Dijk and Joe Gomez amid concerns over their injury status.

The duo both suffered serious knee injuries last season (within a few days of each other in October 2020) and despite returning for Liverpool in preseason training this summer, the duo have yet to play in any preseason friendlies.

That has got Liverpool fans, and everyone else, talking about how fit VVD and Gomez are and other reports suggest that Joel Matip (who missed the second half of last season through injury) and new signing Ibrahima Konate will be their first-choice center backs for the opening weeks of the 2021-22 season.

Here’s the latest on the situation, as Klopp spoke to Liverpool’s in-house TV station after they beat his former club Mainz 1-0 in a preseason friendly on Friday.

What did Jurgen Klopp say about Van Dijk, Gomez?

“It would still be a surprise [if they played against Hertha], unfortunately,” Klopp said. “They look really good. But look, they do everything, they play football, we do the things we can do, they don’t do too much, we just have to be patient. We prepare for a full season, not a preseason game. I will not risk it for a game here. We have a lot of games still coming, but I don’t see them being involved for the next one.”

This is surely just Klopp being sensible and limiting any risk for Virgil van Dijk and Joe Gomez.

And it is smart to do that, even if Liverpool fans are calling for the duo to be played now and are maybe freaking out a little that they haven’t recovered fully.

Liverpool suffered massively without them, then Matip, and only just scraped into the top four of the Premier League as fourth and fifth choice center backs Nat Phillips and Rhys Williams formed a solid enough partnership late in the season.

This is the smart thing to do

With Konate on board and Matip’s injury less serious than the ones Van Dijk and Gomez suffered, Klopp should continue to manage this situation the best way he sees fit. He’s not the type of character who will crumble and throw both players in just because others want him to rush it.

Quite the opposite is true as the likes of Daniel Sturridge, Alex Oxlade-Chamberlain, Xherdan Shaqiri and Naby Keita have all suffered with long-term (and persistent) injuries during Klopp’s time in charge of Liverpool and he only reintroduced them when they were fully fit and is always cautious.

With his high-pressing style of play and incredible physical demands, keeping Van Dijk and Gomez out until they are 100 percent ready is the correct move.

Then again, if Liverpool lose a few games early in the season, we all know the kind of questions Klopp will be getting from all angles…