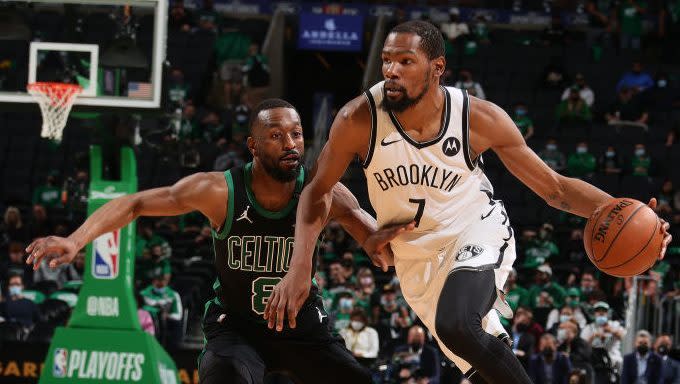 There had been reports Kevin Durant seriously considered joining the Knicks in 2019 when he ultimately teamed up with Kyrie Irving and went to Brooklyn. The Knicks thought so before he tore his Achilles. Durant said New York fans/media bothered him all year and he never planned on going to New York.

Kemba Walker makes it sound like he did. From his introductory press conference with the Knicks, via Marc Berman of the New York Post.

According to an NBA source, Walker wanted to team with Kevin Durant when the Knicks had cap space for two max players. The Walker-Durant Knicks pairing didn’t happen because KD ultimately decided to join Kyrie Irving in Brooklyn.

Here’s what we know for sure: Kemba Walker wanted to team with Durant on the Knicks, and the Knicks wanted it plus they had the cap space to pull it off.

We also know Durant didn’t want that, based on both his actions and his words. Whether he seriously considered it or not only he truly knows, and it’s moot anyway. He made his choice and it wasn’t the Knicks. Walker ended up in Boston.

That was 2019. In 2021, Durant and the Nets — with Irving, James Harden, and a cast of quality role players — head into the season as title favorites, according to our partners at Points Bet. They are the team to beat.

In 2021, the Knicks are coming off a season where they made a leap under new GM Leon Rose and new coach Tom Thibodeau — the next time a big-name free agent comes up for a trade (let’s say, hypothetically, Damian Lillard), the Knicks are ready to pounce. They have become a viable destination again for superstars, which was not always the case in the past decade. There is reason for a genuine optimism around the Knicks right now.

Kemba Walker said it was “pretty close” he, Durant came to Knicks in 2019 originally appeared on NBCSports.com