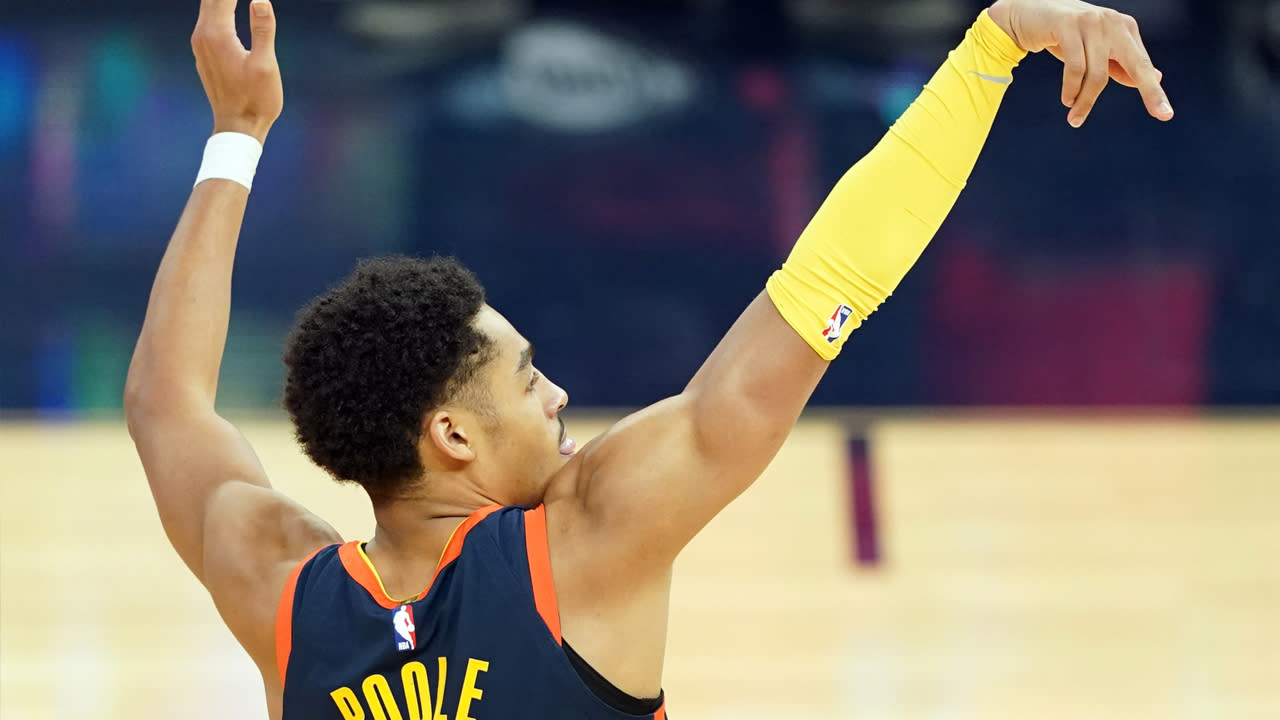 The way Jordan Poole played at the end of the 2020-21 NBA season has the Warriors very excited.

And what Poole showed Sunday during an open-gym exhibition should give the Warriors even more reason for optimism.

Poole, a 2019 first-round draft pick, showed up at Jamal Crawford’s The CrawsOver Pro-Am event in Seattle and balled out in two separate games.

The 22-year-old had several highlight-reel moments during the two games, including passing the ball off the backboard to himself for a sweet dunk.

Poole spends a lot of time in the gym working on his game, and it’s clear from these two 3-pointers that he has been studying the moves and shots of Warriors teammate Steph Curry.

Poole played in two of the four games at The CrawsOver event Sunday, but unfortunately for him, his team lost both games.

In his first game, Poole suited up for The Sonics and finished with 36 points, 11 rebounds and six assists in a 125-122 loss to The Unit.

In his second game of the day, Poole scored 32 points and dished out seven assists in Real Ballers’ 123-114 loss to Ball Is Life.

It looks like Poole’s breakout play from the end of the 2020-21 NBA season has carried over into the offseason.

After a quiet first five weeks of the 2020-21 season, Poole was sent the G League to build up his confidence with the Santa Cruz Warriors. When he returned to San Francisco, the former No. 28 overall pick was a different player.

Poole’s best game of the season came in the second-to-last game of the year when he dropped 38 points on the New Orleans Pelicans to help the Warriors win an important game in the race for the playoffs.

Poole became such a vital part of the Warriors’ rotation down the stretch that coach Steve Kerr believes the combo guard could become a Sixth Man of the Year candidate during the 2021-22 NBA season.

The Warriors hope to return to the postseason and contend for the NBA championship next season, and Poole’s development will be a big factor in Golden State meeting its goal. With a healthy Klay Thompson set to rejoin Curry and Draymond Green in the starting lineup, Kerr will need scoring off the bench, and Poole could be one of the top options to carry the load when the Splash Brothers need to rest.

Based on what Poole has shown over the last few months, it appears he’s ready to step into that role.