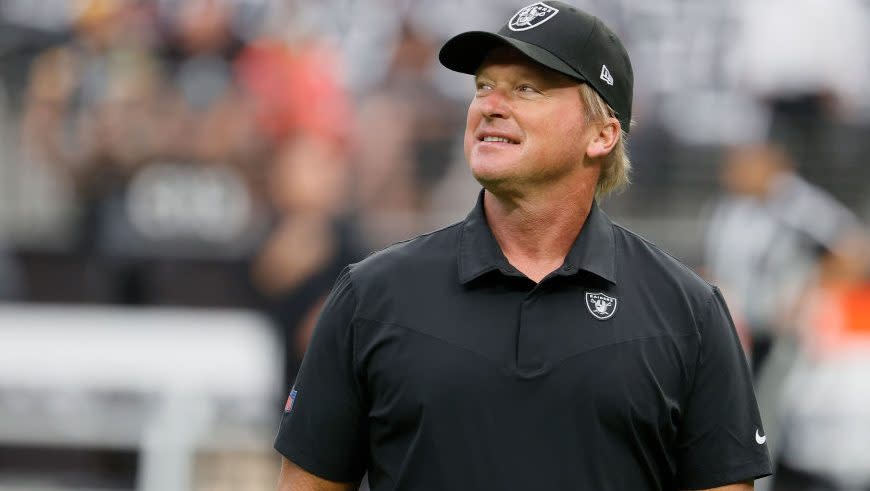 In the 21-page lawsuit filed by former Raiders coach Jon Gruden against the NFL and Commissioner Roger Goodell, Gruden does what plaintiffs in civil cases often do. He has advanced every potential legal theory that the facts and circumstances may support.

As expected, Gruden leads with a claim for intentional interference with contractual relations. Gruden claims that the leaks of his emails to former Washington Football Team executive Bruce Allen caused Raiders owner Mark Davis to force Gruden to resign.

It’s arguably Gruden’s best claim. If the supposedly secret WFT investigation emails had been kept secret — if the NFL had sent them to Davis and to Davis only — Davis quite possibly wouldn’t have fired Gruden. (It will be helpful to Gruden if Davis eventually admits that in open court.)

That approach best compartmentalizes the content of Gruden’s emails and the manner in which the emails were used against him. If the league had not leaked the emails to the media, Gruden arguably could have continued to coach the Raiders.

Gruden, in his second count, alleges that the NFL and Goodell tortiously interfered with his future economic interests. Basically, he claims that leaking the emails necessarily dissuades others from doing business with him moving forward. Also, this claim potentially encompasses the contract Gruden may have signed with the Raiders beyond his 10-year, $100 million deal.

The third count alleges negligence generally against the NFL and Goodell. This potentially becomes the primary fallback argument to the notion that the league or Goodell deliberately leaked the emails. Although the negligence count reiterates the contention that the emails were selectively leaked, Gruden claims that the NFL had a duty to safeguard the WFT emails, and that the league failed to exercise reasonable care to prevent the documents from getting out.

That’s a compelling and commonsensical claim. The league can insist all it wants that it didn’t deliberately leak the Gruden emails. But the truth is that something happened to result in the Gruden emails making their way out from behind Big Shield. Someone mishandled them. Someone leaked them. Someone allowed them to be put in a position that resulted in the documents being leaked.

There’s a doctrine in the law known as res ipsa loquitur. Latin for “the thing speaks for itself,” it means that, in certain cases, the mere occurrence becomes proof that negligence occurred. In this case, the NFL’s stubborn insistence that nothing from the investigation would be disclosed coupled with the fact that a handful of pages were provided to the media suggests that something screwy transpired.

The next claim alleges negligent hiring by the league. The argument boils down to a claim that the league entrusted these sensitive matters to people who failed to protect them. This dovetails with the fifth claim, that the NFL negligently supervised the employees responsible for handling the sensitive information.

The sixth claim accuses the NFL and Goodell of engaging in a civil conspiracy to engineer Gruden’s forced resignation. In other words, he contends that multiple people came together and planned to take Gruden out.

Whether the evidence will support Gruden’s various claims depends on the documents and testimony developed during the discovery process. Through it all, one fact is deniable. Confidential emails that the league had collected and selected for submission to the Raiders ended up escaping the league’s custody and ending Gruden’s NFL coaching career.

It makes sense for Gruden to aggressively pursue how it happened. Even though he got what he deserves for the sentiments expressed in the emails, that doesn’t give the NFL a license to selectively weaponize a few of the pages while concealing the rest of them.

That’s what bothers plenty of people. Gruden, who wasn’t even employed by any NFL team, became the only person to be held accountable for the 10-month investigation into years of misconduct at the Washington Football Team. If nothing else, Gruden’s lawsuit quite possibly will expose plenty of things that the league would prefer to keep secret.