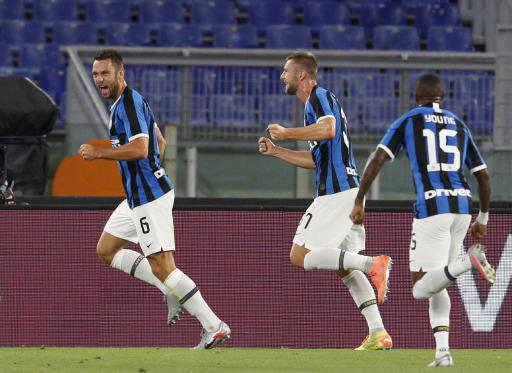 MILAN (AP) — Inter Milan’s faint title challenge took another blow with a 2-2 draw at Roma in Serie A on Sunday.

The result left second-place Inter five points behind Juventus, which can take a huge step toward a record-extending ninth straight Italian league title with a win against Lazio on Monday. That would see the Bianconeri move eight points clear with four matches remaining.

Stefan de Vrij opened the scoring but the Inter defender also contributed to both Roma goals. Romelu Lukaku converted a penalty to level for Inter two minutes from time.

Inter coach Antonio Conte refused to blame his players and instead attacked what he feels is an unfair fixture list after the league restarted following the pandemic-enforced shutdown.

“Ours is a crazy fixture list, made to put us in difficulty,” Conte claimed. “We always play at 21:45, the other team always has a day more of rest. I don’t want to create controversy or seek excuses but if the fixture list was chosen by the clubs … well, maybe we weren’t there.

“It’s the third straight match that we’ve played against a team which has had a day or day and a half more rest than us … we get back home at a crazy time, that makes the difference in this period. At the end, the team which gets a slap in the face is always Inter.”

Inter needed a win to keep pressure on Juventus and it took the lead in the 15th minute when De Vrij headed in Alexis Sánchez’s corner at the back post.

De Vrij was powerless at the other end to prevent Leonardo Spinazzola’s effort from going in during first-half stoppage time. De Vrij appeared to get the last touch but it was credited to the Roma midfielder.

Inter appealed for a foul by Aleksandar Kolarov on Lautaro Martínez in the buildup but, after an on-field review, the referee stuck to his original decision.

Martínez thought he had restored Inter’s lead nine minutes after the restart but it was ruled out for offside.

And it was Roma which took the lead three minutes later. Edin Džeko tried to muscle his way between two defenders when the ball bounced off De Vrij and back into Džeko’s path. Henrikh Mkhitaryan stole it off his teammate’s foot and fired the ball into the back of the net.

Inter was given a late lifeline when Spinazzola fouled Victor Moses and Lukaku slotted the resulting penalty into the bottom left corner.

But the point will do little for Inter’s title dreams.

A bizarre Gabriel own-goal and a missed penalty may have condemned Lecce to relegation as it lost 2-1 at Genoa in a direct fight for survival.

Marco Mancosu had atoned for a penalty miss by scoring a second-half equalizer. However, nine minutes from time, Filip Jagiełło’s long-range strike bounced off the post and ricocheted in off Gabriel’s back.

Spal was relegated after losing 2-1 against Brescia, which itself is nine points from safety and likely to join Spal in Serie B.

Genoa took an early lead when Antonio Sanabria made the most of a fortunate bounce to fire home Goran Pandev’s through ball in the seventh minute.

Lecce had earlier penalty appeals waved away but it was awarded a spot kick on the stroke of halftime. Gianluca Lapadula’s effort was cleared off the line but he was brought down by Genoa goalkeeper Mattia Perin, preventing him from attempting to get to the rebound.

However, Mancosu blasted the penalty over the bar.

The Lecce midfielder did equalize in the second half when his cross evaded everyone to go into the far bottom corner.

Udinese lost 2-1 to Napoli and remained seven points above the drop zone after Matteo Politano scored a winner deep in stoppage time.

Napoli has already qualified for the Europa League after winning the Italian Cup. It moved level on points with AC Milan and two points behind fifth-place Roma.

Sampdoria came back from two goals down to win 3-2 at Parma, and Torino lost 2-0 at Fiorentina.