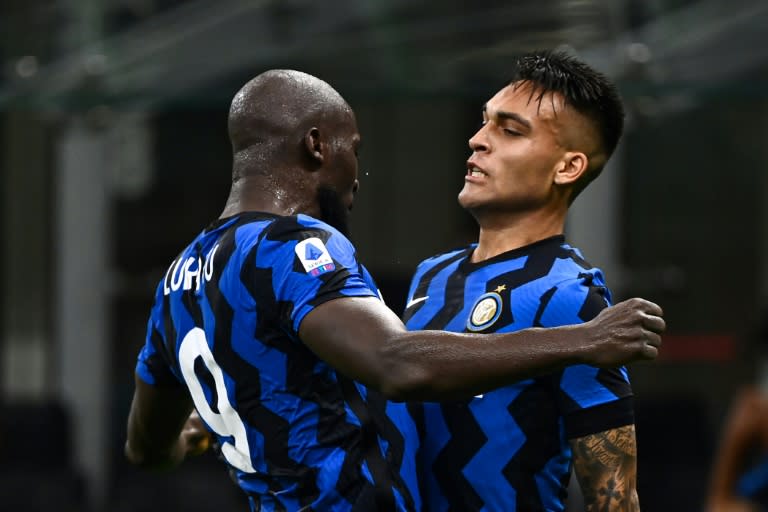 Milan (AFP) – Inter Milan eased past Napoli 2-0 to hold on to second place in Serie A on Tuesday ahead of Atalanta who earlier fought back to beat Parma.

Juventus have already sealed their ninth straight league title, but three teams are fighting for second spot — Inter Milan, Atalanta and Lazio — going into the last round of matches in Italy.

Antonio Conte’s Inter have a one-point lead on Atalanta with the two teams set to go head to head in their final match this season on Saturday.

Lazio, in fourth, will play Brescia on Wednesday, with Simone Inzaghi’s side also still in with a chance of finishing second, with their final game against Napoli at the weekend.

Danilo D’Ambrosio put Inter ahead after 11 minutes at the San Siro with Lautaro Martinez adding a second with 15 minutes to go against seventh-placed Napoli.

Gennaro Gattuso admitted Napoli would need to find goal-scoring solutions before they face Barcelona in the Champions League last 16 on August 8.

«We have to work, we’re lacking a bit of soul,» said Gattuso, whose side have nothing to play for in the league as they are already assured a place in the Europa League as a result of the Italian Cup win.

«After the Italian Cup we’ve performed well but don’t have the knife between our teeth. Against Barcelona it will be a different story.»

Atalanta reacted well after a difficult start in Parma, with Ruslan Malinovskyi and Papu Gomez’s second-half goals sealing a 2-1 victory.

«That was probably our worst first half of the season,» said coach Gian Piero Gasperini.

«After 12 matches at this rhythm, there could be drop in pace but if we come back as good in the second half, it’s because we’re in form.»

The Bergamo club’s former Swedish midfielder Dejan Kulusevski had opened the scoring for mid-table Parma just before the break.

But Malinovskyi sent in a free-kick with 20 minutes to go, and Gomez grabbed the winner six minutes from time as Atalanta warmed up for next month’s Champions League quarter-final against Paris Saint-Germain.

Gasperini’s side are already assured of Champions League football next season and are targeting a club-best second-place finish in the league.

Parma dominated early at home with Kulusevski, on loan from Juventus, putting the hosts ahead two minutes before the break.

Ivorian Gervinho broke through from midfield, sending the ball forward for 20-year-old Kulusevski who fired in for his third goal in as many matches.

Atalanta struggled after losing defender Jose Luis Palomino who pulled up injured and could be in doubt against PSG.

But Malinovskyi finally got the equaliser with his free-kick passing through the Parma wall, and captain Gomez rifled in the winner to extend his side’s unbeaten league run to 17 games, with the club’s 98th league goal this season.