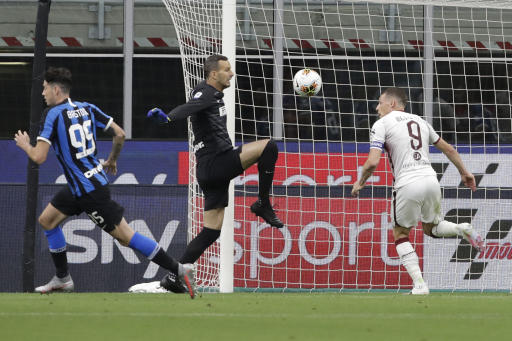 Inter beats Torino 3-1, moves into 2nd place in Serie A

Inter moved into second place in the standings, although its title hopes are slim. League leader Juventus has an eight-point advantage with six matches remaining.

»Victories are important to raise morale and create a sense of certainty, especially for the players,» Inter coach Antonio Conte said. »The work that we’re doing at the minute is important and it’s inevitable that every win acts as a reward for our efforts.

»When we don’t get the win, it’s really frustrating, especially because recently we’ve faced punishments that’s out of proportion with the mistakes that we make. But we’re on the right path.»

Torino remained five points above the relegation zone. It has a crucial match against direct rival Genoa on Thursday.

»We conceded two goals which I think were entirely avoidable and that made us lose a match that could have turned out differently,» Torino coach Moreno Longo said.

»The team has to fight on every field and in every match to win the points we need for survival, nothing changes after this match.»

Ashley Young and Diego Godin scored shortly after the break after a howler from Nerazzurri goalkeeper Samir Handanovic gifted Andrea Belotti the opener. Lautaro Martinez all but sealed the match.

Inter needed a win after two disappointing results. But it was Torino which took the lead in the 17th minute when Handanovic uncharacteristically spilled a corner, allowing Belotti the simplest of tap-ins.

»Unfortunately at the moment we’re paying dearly for every little mistake,» Conte said. »It’s a shame that today it was our captain, Handanovic, who rarely makes an error. But this is typical of how things have been going.»

Inter turned it around after the break as Martinez knocked down a ball for Young to fire in from close range, and three minutes later Godin headed in off the bar.

Inter extended its advantage in the 61st when Martinez’s shot took a deflection to loop over Torino goalkeeper Salvatore Sirigu.