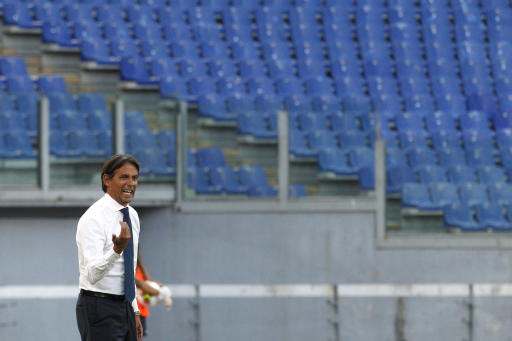 MILAN (AP) — Lazio kept alive its hopes of finishing second in the Italian league with a 2-0 win against already-relegated Brescia in its penultimate match of the season on Wednesday.

Ciro Immobile also boosted his chances of clinching the top scorer award as he netted his 35th goal of the season, moving four clear of Juventus forward Cristiano Ronaldo.

Immobile is also just one off equaling the all-time record of 36 goals in a Serie A season, set by Gonzalo Higuain when he was at Napoli in 2015-16.

Immobile’s late goal sealed the win for Lazio, which had taken the lead in the first half through Joaquin Correa.

Lazio moved level on points with Atalanta, one below second-place Inter Milan. Atalanta plays Inter in the final round of the season, when Lazio visits Napoli.

Lecce was given a glimmer of hope of avoiding relegation as it won 2-1 at Udinese while Genoa was routed 5-0 at Sassuolo.

Lecce remained in the bottom three but is just one point below 17th-place Genoa.

It was the second time in three matches that the 38-year-old Ibrahimovic has got a brace.

Juventus, which won a record-extending ninth straight Serie A title on Sunday, fielded a much-changed team and lost 2-0 at Cagliari.

Cagliari’s Luca Gagliano, who turned 20 last week, scored and provided an assist in his Serie A debut.