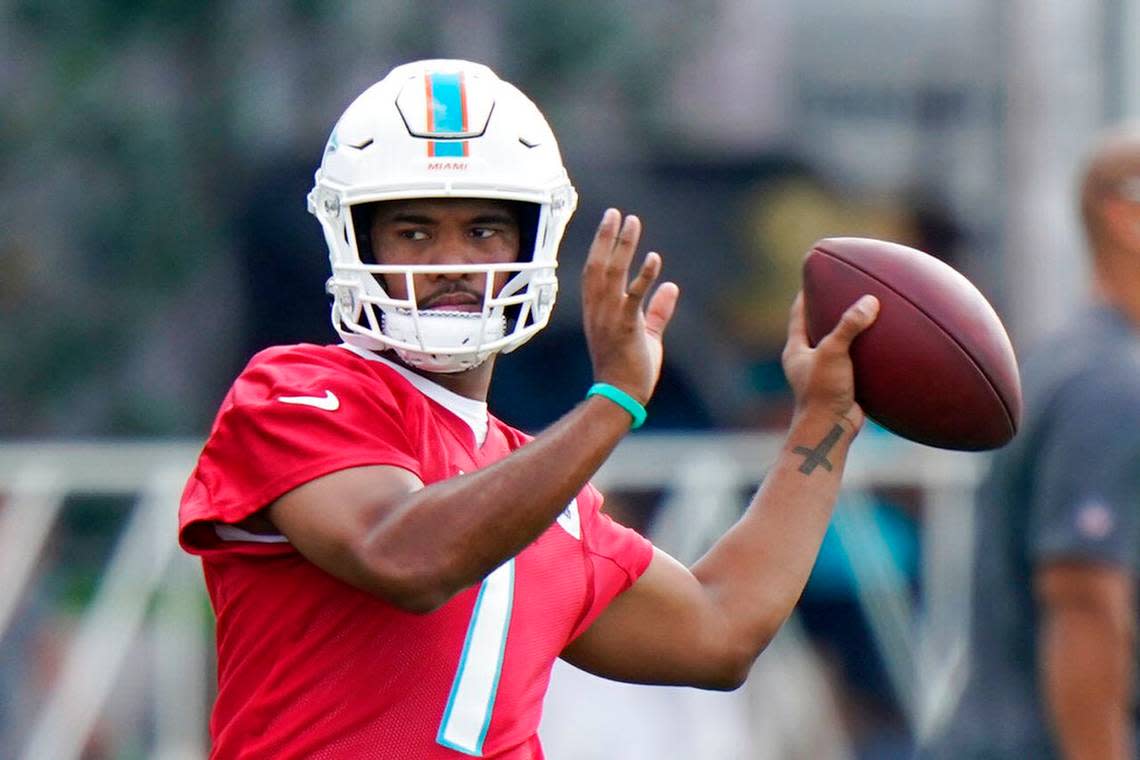 Quarterback Ryan Fitzpatrick has been gone from the Dolphins for seven months, but he still apparently can’t get over the Dolphins replacing him with Tua Tagovailoa last season.

“I have a ton of respect for [Bran Flores], and we have a very good relationship,” Fitzpatrick told The Athletic in a Thursday piece about his career. “But I thought it was a joke at first. We’re putting Tua in? I was floored.”

Fitzpatrick was replaced after two strong performances in two games, with the team at 3-3.

Offensive coordinator Chan Gailey, who left the Dolphins following the season, told The Athletic that he, too, was “in total shock. We didn’t even have a preseason. It was a totally new offense [for Tua]. We were just starting to hit our stride. We’d won two in a row and scored a bunch of points and moved the ball well. It came as a shock to me.”

“That was my team,” Fitzpatrick said. “… I fought through the [expletive] with those guys. I get the way that the NFL works. I get it. But to have it happen the way it did …”

Per The Athletic, when the Dolphins returned to practice, “Fitzpatrick says he tried to downplay his displeasure. As teammates voiced their frustration, he insisted that it was their duty to help Tagovailoa in any way they could.”

Fitzpatrick has praised Tagovailoa publicly this offseason, and the two have a good relationship.

Per The Athletic, Gailey said the choice to bench Tagovailoa late in the Denver and Las Vegas games was a byproduct of Fitzpatrick’s knowledge of Miami’s two-minute offense.

As for Tagovailoa, he had a strong start to Thursday’s joint session with the Bears but a somewhat shaky finish

Early on, he unleashed touchdown passes to Jakeem Grant and Adam Shaheen in red-zone drills. The Shaheen pass, a 15-yarder, was perfectly placed by Tagovailoa against a close Bears defender.

Another potential Tagovailoa TD pass to Mike Gesicki was knocked out of Gesicki’s hands at the goal line. But Gesicki later made a great one-handed catch, his second such catch in training camp.

Tagovailoa delivered a bunch of well-thrown completions to Grant, Jaylen Waddle and others. And he had two good runs when the pocket broke down.

But he was short on a deep throw to Grant, who came back to try to make the catch and then dropped it.

Later, Tagovailoa and Myles Gaskin muffed a handoff, and the Bears recovered the fumble.

And then Tagovailoa threw an interception on a ball that bounced off Grant’s hands. But Tagovailoa came back with a touchdown pass to Robert Foster very late in team drills.

Tagovailoa finished with that one interception in the two days, though Waddle had to knock away one potential interception that was just out of his reach to be able to catch.

“Tua said he loves us; that’s all we need,” Solomon Kindley said.

More highlights from the second and final day of joint practices in Lake Forest, Illinois:

▪ Salvon Ahmed broke a tackle for a nice run. … Myles Gaskin continues to impress this camp; he showed an impressive burst on a run up the middle. … Malcolm Brown had at least two touchdown runs, one for 10 yards.

▪ Adam Butler and Andrew Van Ginkel had tackles for loss, and Raekwon Davis stopped a run for no gain. … Emmanuel Ogbah and Christian Wilkins had sacks …

Earlier, Rowe and Chicago tight end Cole Kmet pushed each other after a Cole reception. They had to be separated.

“That’s the sport, out there competing hard,” Rowe said. “Sometimes things just get chippy. I saw him catch the ball and gave him a little shoulder tap and he fell. He pushed me in the back. I wasn’t even mad about it. I was just laughing.”

▪ Besides the tackle for loss, Van Ginkel also had an interception. He’s a very likely starter at outside linebacker.

▪ Jason Sanders went 6 for 6 on field goals. He has had a great camp.

Jaelan Phillips, who practiced Wednesday after missing 11 days with a lower-body injury, did not practice on Thursday, but the team made clear that he’s being brought back at a deliberate pace.

Phillips is being “ramped back up” after missing 10 days, Flores said, naming “conditioning purposes” as one of the reasons that he isn’t immediately being given a full workload at practice.

“He’s just not ready yet, hasn’t had enough snaps,” Flores said. “That’s generally how teams do it. Hopefully, we’ll build off of [Wednesday’s practice, when he took some snaps] and ramp him up over the course of days, weeks, etc.”

Even though the Dolphins are training Phillips at linebacker, defensive coordinator Josh Boyer said the team intends to use him in different roles. Phillips was a linebacker at UCLA but mostly a defensive end at Miami.

▪ With Liam Eichenberg sidelined with a shoulder injury (timetable to be determined), Kindley took first team snaps at left guard and did excellent work in the run game on Thursday. Kindley started 13 games at right guard last season.

Kindley said of the move from right guard to left guard (where he played at Georgia): ”The technique, feet placement changes but it’s the same assignment. You have to really study your plays.”

He said he plays with “grit, anger and giving effort. We put our head down and worked and don’t worry about what anyone else says.”

▪ Even though Jevon Holland had three interceptions in a span of four practices, Jason McCourty opened with the starters at free safety on Thursday.

One smart thing that Holland is doing is peppering the Dolphins’ quarterbacks with questions to gain the knowledge he needs as an NFL safety.

“I actually do go and pick their brain a little bit, especially Jacoby Brissett,” he said. “I try to ask him what he’s looking for when we’re trying to show disguise and things like that. Same with Tua. Tua gives me great insight. All of them are great — Reid Sinnett, too. They give me insight on what they’re looking for and their keys so I can … try to confuse them before the play.”

Holland broke up two passes during Thursday’s practice, nearly intercepting one of them.

“He’s doing a lot of good things from a fundamentals standpoint,” Flores said, when asked about Holland’s four takeaways in the past week [including one fumble recovery]. “I don’t judge people off of three or four plays. He’s had 500 plays over training camp; not going to judge them on four of them, good or bad.”