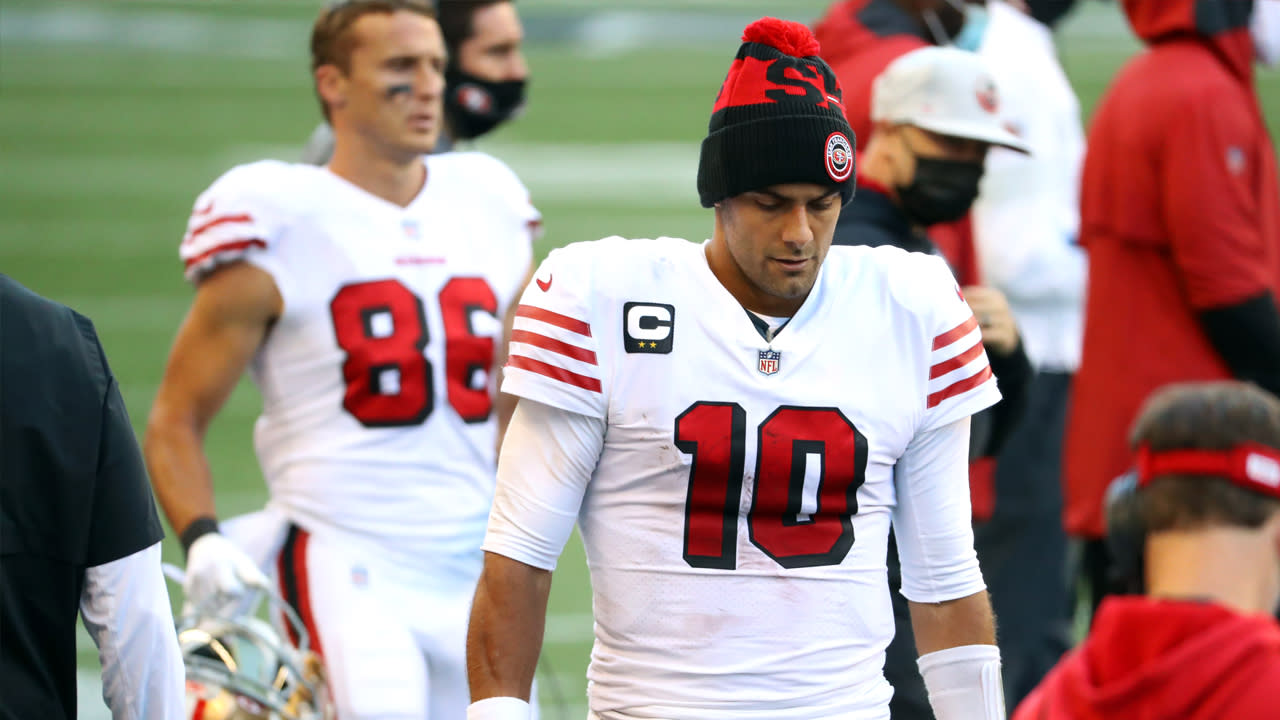 John Lynch is well aware of the questions surrounding the future of the 49ers, starting with quarterback Jimmy Garoppolo.

After Garoppolo led the 49ers to a 13-3 record and berth in Super Bowl LIV, Lynch and coach Kyle Shanahan were hoping the quarterback would take a leap in 2020. Unfortunately, two separate high ankle sprains have hampered Garoppolo’s 2020 campaign. When he was healthy, Garoppolo’s play could be described as uneven at best.

As the 4-5 49ers start to turn their attention toward the future, Lynch knows there are several questions surrounding Garoppolo and whether or not he is the 49ers’ answer at quarterback.

«And so, people can try to pick his game apart — and I do believe a lot of this year, Jimmy hasn’t played up to his standard. I think a lot of that; he’s been somewhat compromised with his health since he had that high ankle in the New York Jets game. Think about before the ankle injury in that game, I believe he was 12-of-14; he was our player in the game. We’ve got a lot of faith in Jimmy.»

Lynch is doing a lot of work to carry Garoppolo’s water here. Is the 49ers’ record better when Garoppolo starts as opposed to Nick Mullens and C.J. Beathard? Of course, Garoppolo is a far more talented player than two replacement-level quarterbacks. Did Garoppolo play well for a half against the Jets, who are the worst team in the NFL this season? Sure did. But he was awful in a Week 1 loss to the Arizona Cardinals, and beating the Jets isn’t exactly the goal the 49ers have in mind.

Garoppolo is an average NFL starting quarterback. He fits into a tier with Jared Goff, Baker Mayfield, Kirk Cousins and Matthew Stafford. He can get you to a Super Bowl. He has. But can he make the plays to outduel an elite starting quarterback on the other side? More often than not, the answer is no.

The 49ers can move on from Garoppolo with little cap penalty after this season. In order to do, they need to be sure they can get a quarterback with a higher ceiling than Garoppolo who fits into Shanahan’s system and can maximize the talent around him.

Lynch and the 49ers have a big offseason ahead of them. They have built a winning roster but must find the right quarterback to lead the team going forward. Is Garoppolo that guy? Until that question is answered, it will continue to be the «elephant in the room.»