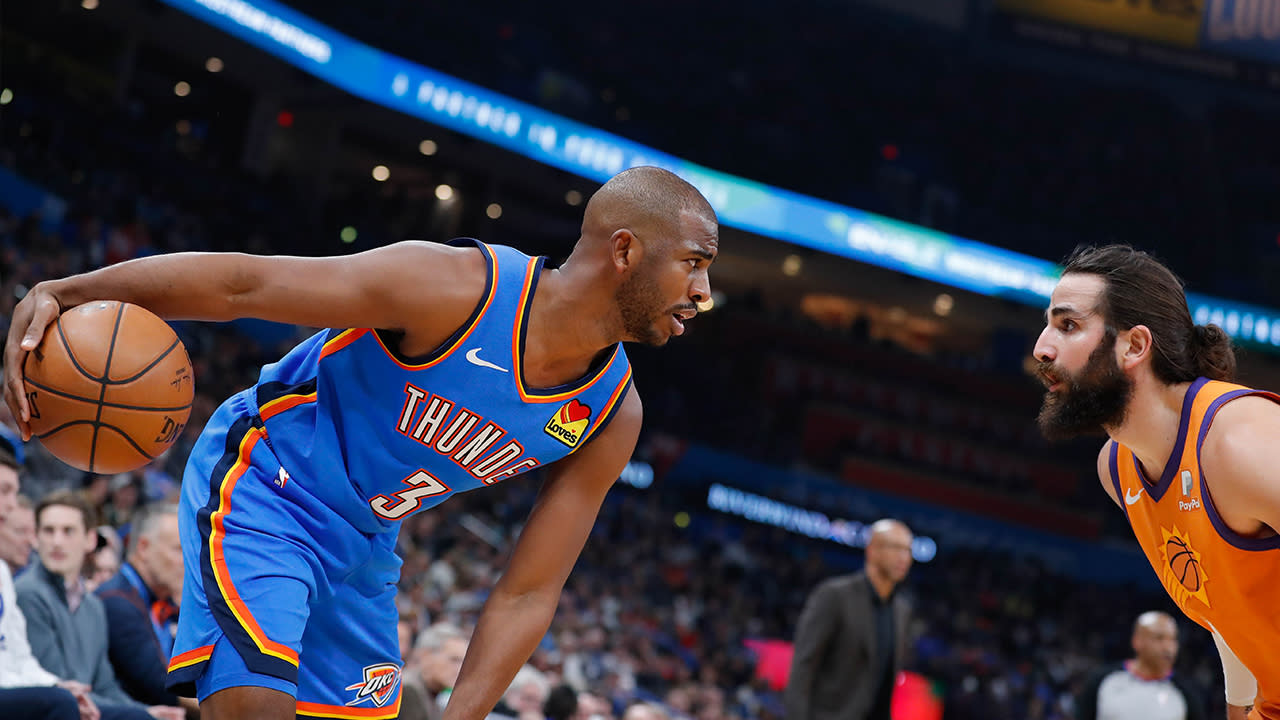 He’s not at the top of the list of the Warriors’ greatest nemeses, but he’s near it. Chris Paul has been a thorn in Golden State’s side for basically the entirety of the last decade, an annual rival during his time with the Los Angeles Clippers, Houston Rockets and, most recently, with the Oklahoma City Thunder.

And now, Paul could be heading to another Western Conference team.

ESPN’s Brian Windhorst and Tim Bontemps reported Tuesday night, citing sources, that the Thunder and Phoenix Suns have had discussions on a trade centered around Paul. Though talks reportedly are ongoing, no trades can be completed until the NBA moratorium on trades ends on Nov. 16, two days before the 2020 NBA Draft.

Paul, 35, is coming off a season in which he averaged 17.6 points and 6.7 assists per game and was named Second Team All-NBA. He led Oklahoma City to a surprise playoff berth and nearly completed a seven-game upset of the Houston Rockets in the first round. Paul still has two years and $85.5 million remaining on his current contract, and given the Thunder’s current rebuilding phase, it makes sense why they would be considering trading him.

The Suns, on the other hand, are on the upswing. They were the hottest team finishing out the regular season in the Orlando bubble, and many expect them to continue that momentum in the season ahead. Adding Paul to a core that already includes Devin Booker and DeAndre Ayton likely would increase their chances of doing so.

As for the Warriors, though, the trade likely wouldn’t change much if it went through. The Western Conference is so stacked as it is that Paul going from Oklahoma City to Phoenix is highly unlikely to swing the balance of power.

Golden State is widely expected to return to the playoffs this coming season, which means there’s already one fewer available playoff spot in the West than last season. The Thunder might have been the odd team out as it was, and if they trade Paul, that surely will be the case. But that still doesn’t give Phoenix a direct path to the postseason.

If we assume that the Warriors, Los Angeles Lakers, Los Angeles Clippers, Denver Nuggets, Houston Rockets, Dallas Mavericks and Utah Jazz are sure-fire playoff teams, that means that the Suns — with Paul — likely would be competing with the Portland Trail Blazers, Memphis Grizzlies and San Antonio Spurs for the last remaining spot.

Would Phoenix be favored to fill it? Possibly, but it’s by no means a sure thing. There’s always a chance one of the «sure-fire» playoff teams doesn’t live up to that billing, but the point is the Suns are going to find things very challenging, whether or not they acquire Paul.

If he does join Phoenix, the Warriors likely will see him slightly more than they would have otherwise. In a typical 82-game season, Golden State would play each of the other four Pacific Division teams four times per season, and would have either three or four matchups with the other Western Conference teams. However, the 2020-21 season will consist of 72 games, so that previous structure has gone out the window.

Due to the ongoing COVID-19 pandemic, the league reportedly is considering creating a schedule in which travel is limited, meaning teams likely would face those in their region more than those who are not. If that’s the case, the Warriors and Suns surely will be seeing plenty of each other, but probably not considerably more than any other season.

There seem to be only two direct ways in which Paul-to-Phoenix could have a major impact on the Warriors. First and foremost, it increases the chances of a playoff matchup between the two teams (though not by much). And, if the Suns get Paul, they’ll have no need for another field-general point guard.

The Warriors could use one, and conceivably have the assets to acquire Ricky Rubio. He’ll make $17 million this season, and Golden State has a massive $17.2 million trade exception that expires later this month.