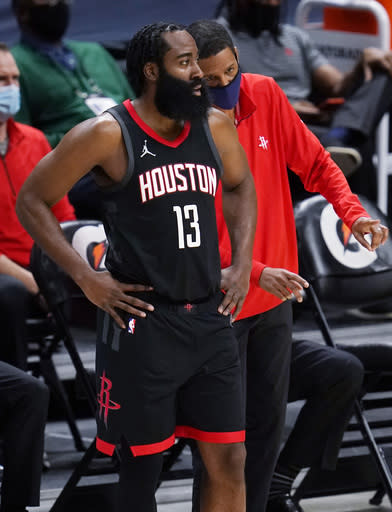 HOUSTON (AP) — James Harden doesn’t want to be a Houston Rocket. On Wednesday, the Rockets told him they didn’t want him at practice after his inflammatory comments about the team.

»We felt it was best for James and best for the group for him not to come to practice,» coach Stephen Silas said.

The disgruntled superstar had remained quiet through months of speculation that he is unhappy in Houston. Numerous reports have indicated he’s looking to be shipped to Brooklyn to play with former Oklahoma City teammate Kevin Durant.

He finally voiced his frustration on Tuesday night after the second straight blowout loss to the Los Angeles Lakers.

»We’re just not good enough … I love this city. I literally have done everything that I can,» Harden said after the game. »I mean, this situation is crazy. It’s something that I don’t think can be fixed.»

The Rockets begin a three-game road trip on Thursday night with the first of two straight games against San Antonio. Silas said Harden’s status for the trip remained up in the air on Wednesday.

»We’re still kind of communicating on that and trying to figure out what that looks like,» he said. »But all parties have to be kind of on the same page when it comes to when it comes to that one. So, I don’t have a good answer for you on that one, hopefully within the next little while I’ll have a better answer for you.»

Silas, who is in his first season as a head coach after two decades as an NBA assistant, said he didn’t sleep at all on Tuesday night after Harden’s comments. Silas said he spoke to Harden on Wednesday but declined to provide details.

Th Rockets are just 3-6 so far this season and only Minnesota has a worse record in the Western Conference. The team is clearly in disarray and new arrival John Wall called the situation »rocky.»

»There has to be some sort of resolution, whether it’s a complete buy-in at some level or some other way to kind of get it taken care of,» Silas said. »So, yeah, it’s not it’s not an easy situation by any stretch of the imagination. But the team atmosphere… the good of the team, I say everybody needs to be pointed in the same direction and that’s what’s best.»

Harden reported late for camp. He also was fined $50,000 earlier this season for conduct detrimental to the league related to him not following the health and safety protocols put into place by the NBA and the National Basketball Players Association for navigating a season during the pandemic.

Harden’s teammates were left to prepare for the Spurs and answer questions about his disparaging comments.