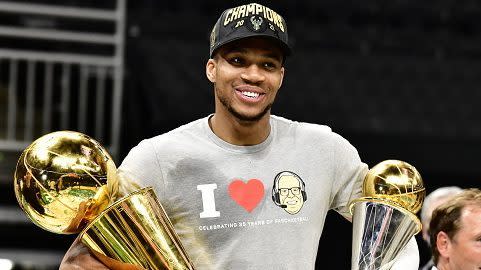 We are in the era of player empowerment. The league’s best players have power and use it to leverage where they want to play and with whom, forming powerhouse teams that chase and win rings.

Giannis Antetokounmpo has always been a different kind of superstar, both on and off the court. A year ago he was approaching free agency this coming offseason, and teams from New York to Miami to Los Angeles were ready to chase him via trade or just sign him outright. He could have used his leverage to force his way nearly anywhere. Instead, he chose to re-sign a supermax deal with the Bucks.

That decision made all the difference to Antetokounmpo.

“But that’s my stubborn side,” he said Tuesday night, sitting between the NBA championship and Finals MVP trophies. “It’s easy to go somewhere and go win a championship with somebody else. It’s easy… I could go to a super team and just do my part and win a championship.

Giannis Antetokounmpo is a story of loyalty rewarded, and it’s a great story. He should be proud of it. The Bucks drafting a skinny 18-year-old kid out of the second division of Greece, helping him develop and grow as a player and a person, becoming his family, and around him building a team that was eventually good enough to win a ring.

Be careful trying to use it as a shining example for other players to follow — these stories don’t always end the same way.

Portland drafted a little guard out of Weber State that not everyone was sure could translate his game to the NBA, but Damian Lillard has turned himself into one of the top seven players in the NBA. He has remained loyal to the Trail Blazers and the city of Portland… and they have not built a contender around him. He watches the Bucks find a way to get Jrue Holiday onto the roster and thinks, why don’t we have that kind of urgency?

Lillard’s loyalty and story have not been rewarded like Antetokounmpo’s — we shouldn’t look down on Lillard for using his leverage to force change or want out to go win. Whether a “rings at all cost” culture is good for the NBA — and whether fans should think that way — is a topic worth discussing, but the bottom line is it exists. Players like Charles Barkley have Hall of Fame careers with gold medals and get mocked by Shaq for not having a ring. You can’t have that culture then blame players for using their power to chase rings.

What about Bradley Beal in Washington, a franchise that has not built a team anywhere near as good as Portland around its star. Would Beal be wrong to ask out?

Would LeBron James have any rings if he had never left Cleveland? That was a pretty barren team around him in 2010 when he took his talents to South Beach. Would Durant have any rings if he stayed in Oklahoma City? Would Anthony Davis if he stayed in New Orleans? Was James Harden wrong to want out of Houston? And the list goes on and on. Are those players wrong to want to play where they want to play?

It’s a great story when Milwaukee builds up Antetokounmpo and puts a team around him that can win. Or when the Warriors draft Stephen Curry and the core of a dynasty team with Klay Thompson and Draymond Green. Or when Tim Duncan gets drafted onto a team with David Robinson (and they later draft Tony Parker and Manu Ginobili). Or when the Lakers can draft Kobe Bryant and get Shaq to leave Orlando to chase a ring. It’s a great story when loyalty is rewarded.

Just don’t try to make it a one-size-fits-all story that works for every superstar. It doesn’t. And the players who have earned the right of free agency should be able to leverage that to chase rings, if that is what we value as a basketball culture.

Here is more on the Bucks