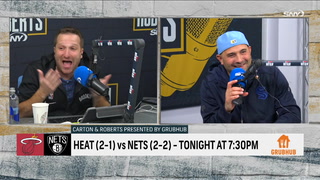 Evan Roberts and Craig Carton have a heated debate on whether the New York Knicks or the Brooklyn Nets are more popular in NYC. Evan says the Nets have it because they are the better team while Craig points out how many viral things the Knicks and their fans can create on a whim because they are the city’s true team. Watch more Carton & Roberts: https://sny.tv/shows/wfan-carton-and-roberts-sny-tv-simulcast About Carton & Roberts: Craig Carton spent a decade on WFAN mornings, Evan Roberts spent a dozen years in the midday…and now, they’re together in the afternoons on SNY!