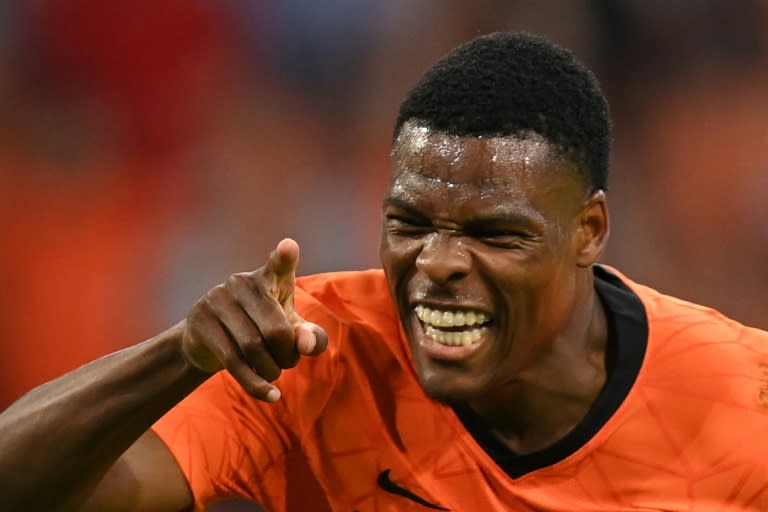 Denzel Dumfries isn’t worried about living up to departed star Achraf Hakimi as the Netherlands right-back eases into life at Inter Milan, a club whose frowns have been turned upside down following a sparkling opening weekend.

Inter Milan travel to Verona on Friday looking for confirmation that the champions’ new boys can help fans forget the pain of losing their star turns in a turmoil-filled close season.

Edin Dzeko and Hakan Calhanoglu both shone in last weekend’s 4-0 hammering of a limp Genoa at the San Siro, with Dzeko putting on a display that suggested Romelu Lukaku might not be as missed as previously thought.

Dumfries came on towards the end of that win to rapturous applause from the 27,000 Inter fans present, who will be hoping the 25-year-old can help plug the large hole left by Hakimi, a key figure in Inter’s first league title since 2010.

«It was massive for me. My family were also in the stadium and they were also very happy and proud of the moment, and for me it was a very special moment to enter the pitch for the first time as an Inter Milan player,» Dumfries said in an interview broadcast on DAZN.

«Hakimi had an incredible season last year… but no pressure, I need to play my own game and do my best for Inter.»

Inter have brought in reinforcements since losing Lukaku and Hakimi, with Joaquin Correa also arriving in Milan on Wednesday from Lazio to strengthen a forward line which also contains Lautaro Martinez.

Inter will come up against stiffer opposition than Genoa but a summer of turbulence seems to be behind new coach Simone Inzaghi, himself new to Inter after Antonio Conte left in May following proposed cost-cutting from the club’s cash-strapped owners Suning.

This weekend will also be a test for DAZN, the sports streaming service who were heavily criticised by fans for problems during the opening weekend.

Some supporters wanting to see Inter open their title defence were greeted with a black screen, while others had to deal with grainy video and periodic buffering which severely hampered enjoyment of an excellent performance.

DAZN’s social media channels were inundated with negative comments from subscribers who pay up to 30 euros a month primarily for coverage of Serie A.

DAZN claimed that the problems, also experienced during Juventus’ dramatic 2-2 draw at Udinese on Sunday, were due to a «spike» in traffic and were resolved quickly, adding that only a relatively small number of viewers had image quality issues.

On Tuesday Serie A asked for assurances that similar problems wouldn’t occur this coming weekend, but this is not the first time there have been issues with DAZN’s broadcasts.

There were already doubts about the decision to award the rights — all 10 matches each round with Sky also allowed three a week — to a streaming service in a country which lags behind others in Europe for internet quality.

In April, just days after beating satellite service Sky to the main rights package for this season in a deal worth 2.52 billion euros ($2.97 billion), fans were presented with a black screen for two matches featuring Inter and Lazio.

The 27-year-old made an immediate impact on his Inter debut last weekend and will once again be charged with providing the creative spark from midfield alongside Nicolo Barella and Marcel Brozovic.

Calhanoglu was brought in to fill the gap left by Christian Eriksen, with the Dane’s career in Italy in the balance due to the pacemaker he now wears following his cardiac arrest at Euro 2020.

If anything he looked more at ease in an Inter shirt than Eriksen despite arriving from local rivals AC Milan.