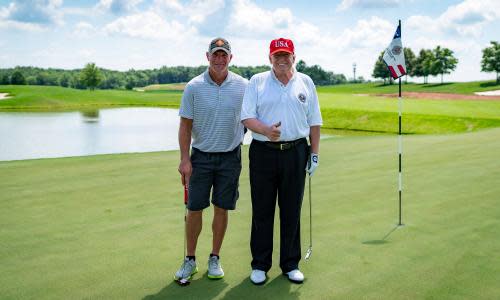 Donald Trump hit the links with football great Brett Favre on Saturday at his golf club in the suburban New Jersey hamlet of Bedminster.

White House deputy press secretary Judd Deere shared a photo of the US president alongside Favre, the three-time NFL MVP who played the bulk of his career with the Green Bay Packers and was inducted to the Pro Football Hall of Fame in 2016.

The visit to marked Trump’s 10th trip to one of his golf courses in the last 29 days.

Deere said the president made the journey to Trump National Golf Club in Bedminster to attend a fundraising event at the club on Saturday night hosted by America First Action, a Super Pac which has spent over $540,000 to host events at the Trump’s Washington DC hotel, making it a top source of campaign revenues for the hotel and the family’s business, according to public data and 1100 Pennsylvania, which tracks Trump hotel events.

Favre, who played 17 seasons with the Packers before finishing with the New York Jets and Minnesota Vikings, retired in 2010 as the NFL’s all-time leader in passing yards, passing touchdowns and quarterback wins.

His one-year stint with the Jets brought him into the orbit of Woody Johnson, the team’s billionaire owner who this week came under fire amid reports he was investigated for allegations of controversial remarks and dealings in his role as Trump’s ambassador to the United Kingdom.

Saturday’s round was not the first time Trump has golfed with a famous athlete. The US president has counted Tiger Woods, Jack Nicklaus and Dustin Johnson among his coterie of playing partners since taking office. In March, four days before Major League Baseball canceled spring training due to the coronavirus outbreak, Trump golfed with Washington Nationals players Ryan Zimmerman, Trea Turner, Kurt Suzuki, Patrick Corbin and Daniel Hudson.

Rory McIlroy, the PGA Tour’s current world No 2 who faced intense backlash after playing a round of golf with Trump shortly following his inauguration in 2017, admitted the president was “charismatic” and had an “X factor” but said he wouldn’t play with him again if asked.

“I don’t know if he’d want to play with me again after what I just said, but I wouldn’t [play with him again],” McIlroy said in May. “I felt I would have been making more of a statement if I had turned it down. It was a round of golf and nothing more.”

McIlroy went on to criticize Trump’s politicization of a pandemic that had claimed more than 85,000 American lives at the time, a figure that has nearly doubled since then.

“We’re in the midst of something that’s pretty serious right now and the fact that he’s trying to politicize it and make it a campaign rally and say we’re administering the most tests in world like it is a contest – there’s something that just is terrible,” McIlroy said.

He added: “It’s not the way a leader should act. There’s a sort of diplomacy that you need to have, and I don’t think he’s showing that, especially in these times.”

Golf Digest magazine has said Trump has a “low single-digit handicap” and may be the best golfer to occupy the White House.

But he has also been described by fellow players as “the world’s worst cheat at golf” in Commander in Cheat: How Golf Explains Trump, a 2019 book by former Sports Illustrated columnist Rick Reilly, who has played with Trump himself.