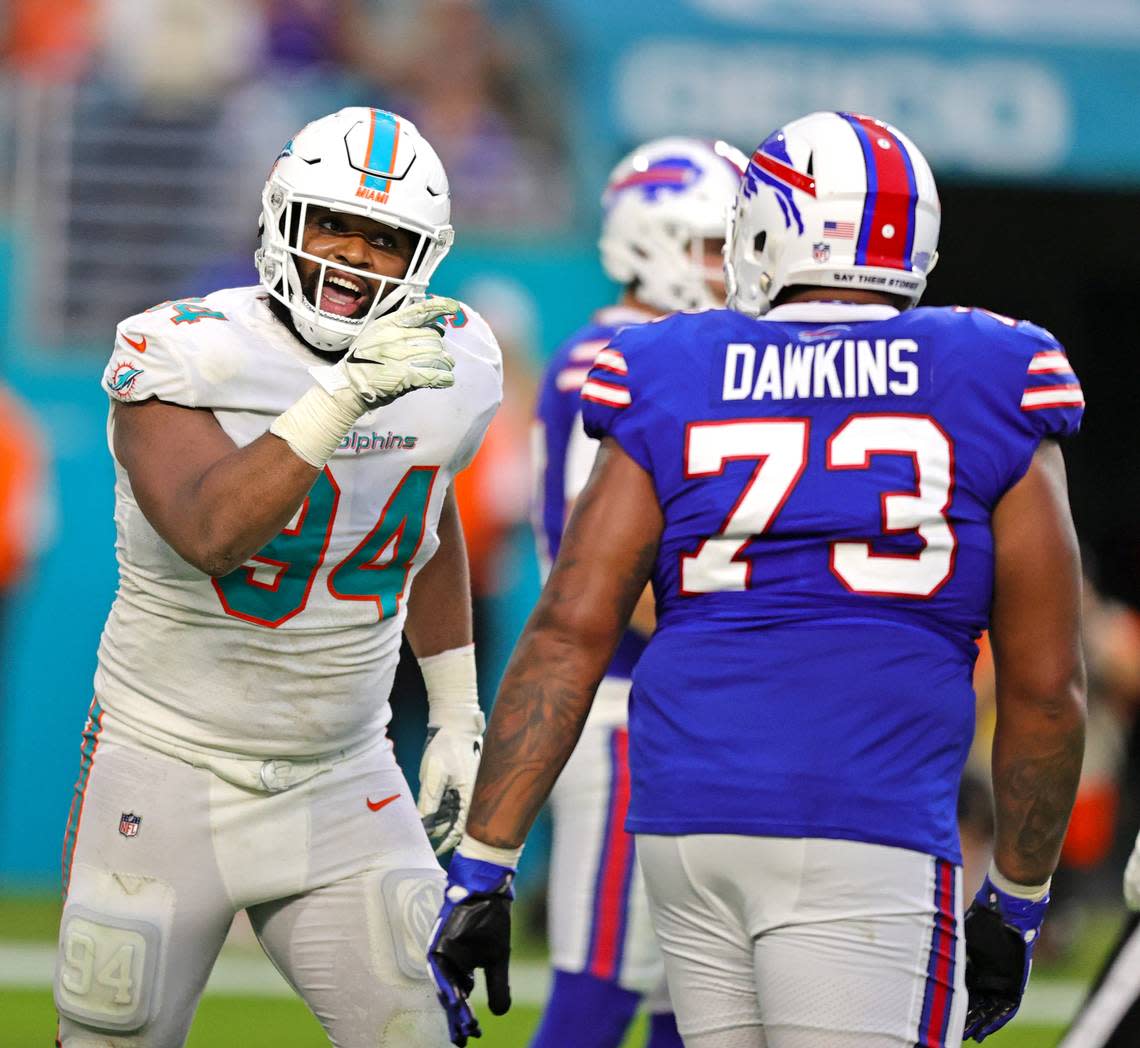 Defensive tackle Christian Wilkins, one of the Dolphins’ best players this season according to metrics sites, was not seen at practice Wednesday. The team identified the reason later in the day on the league-required injury report:

He has a quadriceps injury.

The severity is unknown, because coach Brian Flores did not mention it when he spoke with reporters earlier in the day.

Severity of quad injuries can vary widely. Dolphins running back Malcolm Brown will miss a fourth consecutive game this week with a quad injury.

It’s possible the Dolphins could elevate defensive tackle Andrew Billings from the practice squad after his addition this week. Billings started 37 games for the Cincinnati Bengals.

Pro Football Focus says Wilkins has been the sixth-best interior defender in the NFL this season.

Safety Elijah Campbell (toe) was the only other Dolphins player that missed practice Wednesday.

Two days after releasing safety Sheldrick Redwine, the Dolphins signed defensive back Jamal Perry — who had been on their practice squad — to the 53-man roster. Though Perry is listed as a cornerback, he has spent considerable time practicing at safety.

Perry, who has earned high marks for his work on special teams, has appeared in 30 games with seven starts for the Dolphins over the past three seasons and had 72 tackles, one interception and two passes defended.

The Dolphins had elevated him three times this season, and league rules prohibited them from elevating him again, leaving the 53-man roster as the only option for him to be active on game days.

Meanwhile, the Dolphins brought in another young developmental quarterback, signing Jake Luton to their practice squad.

Luton, selected by Jacksonville in the sixth round of the 2020 draft out of Oregon State, replaced injured Gardner Minshew as the Jaguars’ starter last season and went 0-3, throwing for 624 yards, with two touchdowns and six interceptions and a 54.5 passer rating.

Jacksonville then benched him and replaced him with Mike Glennon.

He was cut by the Jaguars on Aug. 31 and joined the Seattle Seahawks four days later, spending time on both their active roster and practice squad this season but not appearing in a game.

Luton, who stands 6-6, began his college career at Idaho and threw 28 touchdowns and three interceptions at Oregon State in 2019.

He replaces Jake Dolegala as the quarterback on Miami’s practice squad.

Flores said starter Tagovailoa and backup Jacoby Brissett will be available Sunday at the Jets.

The Dolphins have been looking for a developmental quarterback for their practice squad since Reid Sinnett was claimed off waivers by Philadelphia last month after the Dolphins tried to move him from their active roster to the practice squad.

The Dolphins added another player to their practice squad on Wednesday: 6-4, 260-pound linebacker Kobe Jones, an undrafted rookie from Mississippi State who had spent time with the Falcons this season but didn’t appear in a game.

He started 13 games and had 22 tackles for loss during his Mississippi State career.

Here’s my Wednesday 6-pack of Dolphins nuggets, including the team’s explanation for offensive line decisions and candid remarks from Eric Rowe.