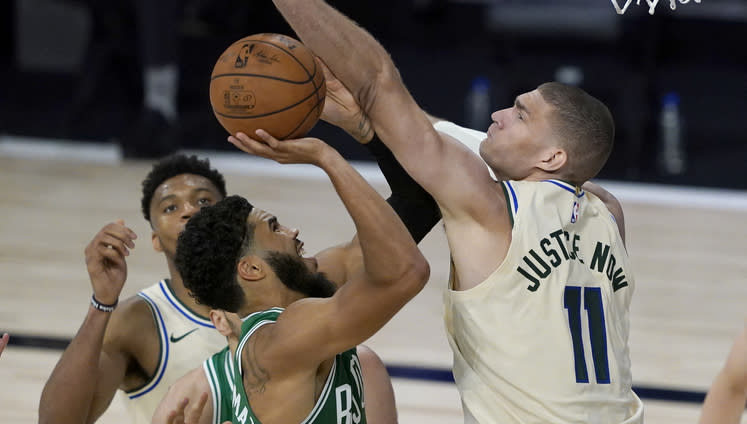 Jayson Tatum is used to points coming easy to him.

But his first «basket» in Boston’s matchup with the Milwaukee Bucks on Friday night could not have come any easier.

A Celtics miss was tipped in by a pair of Milwaukee players, with Tatum being the nearest Boston player and thus, got credit for the basket.

Boston’s 119-112 loss to the Milwaukee Bucks was the first taste of basketball in the bubble for the Celtics who will surely take away a slew of positives, such as Kemba Walker‘s effective play (16 points in 19 minutes) with a minutes restriction, making Celtics killer Khris Middleton average (18 points on 6-for-20 shooting) and the contributions from the team’s backcourt reserves.

Don’t miss NBC Sports Boston’s coverage of Celtics-Trail Blazers, which begins Sunday at 2:30 p.m. with Celtics Pregame Live followed by tip-off at 3:30 p.m. You can also stream the game on the MyTeams App.

Here’s a look at some of the more memorable players in Friday’s game.

Giannis Antetokounmpo: The reigning league MVP had a double-double by halftime, and finished with yet another dominant performance. He would lead all players in scoring with 36 points to go with 15 rebounds and seven assists.

Marcus Smart: With Kemba Walker’s minutes limited, Smart made the most of his increased role to provide more of a scoring punch along with his usual assortment of strong defense. He tallied 23 points off the Boston bench to go with four rebounds.

Gordon Hayward: Filling up the stat sheet is arguably Hayward’s greatest quality for Boston. The veteran wing was indeed in his full bag of tricks Friday night, finishing with a near triple-double with 17 points, nine rebounds and six assists.

Jayson Tatum: The Celtics All-Star has had plenty of memorable games this season, but this one stood out for all the wrong reasons. Tatum scored just five points while connecting on just two of his 18 shot attempts, one of which was a basket he was credited with after a pair of Bucks tipped in a Celtics miss.

With the score tied at 107, Giannis Antetokounmpo drove into the lane and scored with Marcus Smart in position for what appeared to be a charge. After officials reviewed the play, Antetokounmpo’s basket counted while Smart was called for the blocking foul. Antetokounmpo, who would have fouled out of the game if he was called for an offensive foul, made the free throw to put Milwaukee ahead, a lead that the Bucks would not relinquish.