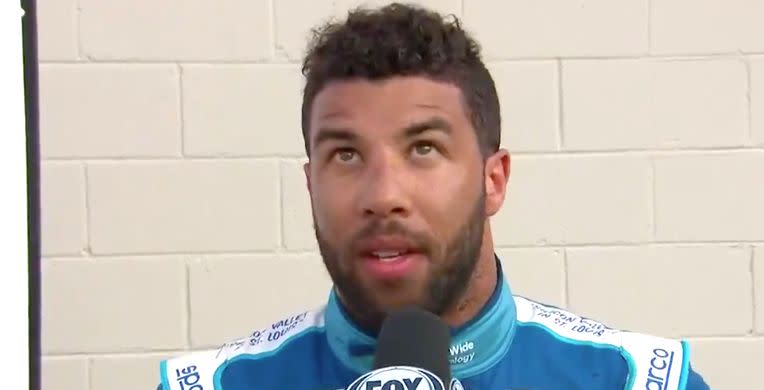 Bubba Wallace fumed at a competing NASCAR driver after a wreck ended his race at Bristol Motor Speedway in Tennessee on Wednesday.

Michael McDowell’s car appeared to clip Wallace’s in an All-Star qualifying race, causing it to spin out into the wall.

“Just disrespect,” Wallace said in the video, below, which also includes a replay of the crash. “When you get hooked into the wall, I don’t even need to see a replay.”

“I can’t wait for the God-fearing text that he is going to send me about preaching and praise and respect. What a joke he is.”

It also has been a tense time for Wallace off the track. As Black Lives Matter gained attention, Wallace, who is Black, successfully lobbied NASCAR to ban the Confederate flag. Then a Wallace crew member found a noose being used as a garage handle at the team’s racetrack stall.

An FBI investigation found that the noose had been there long before Wallace’s team occupied the space. President Donald Trump later unjustly accused Wallace of a “hoax.”

But the collision on Wednesday hurt Wallace’s prospects on the track. The wreck in the NASCAR All-Star Open eliminated him from possibly taking one of the few spots remaining in the Cup Series All-Star Race afterward, ESPN reported.

Wallace apparently left McDowell a souvenir of their encounter ― the bumper off Wallace’s wrecked car.

McDowell doesn’t appear to have publicly responded to Wallace’s slam.

Love HuffPost? Become a founding member of HuffPost Plus today.