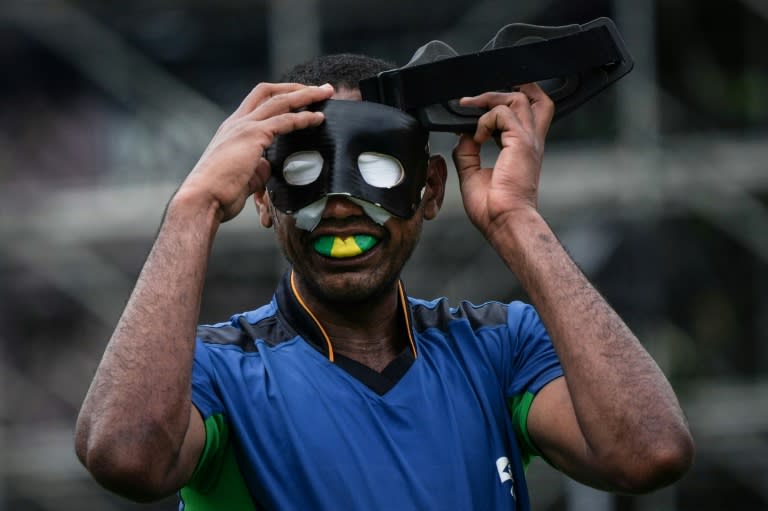 With flicks and tricks aplenty, Brazil’s five-a-side football team are bringing a touch of samba magic to the Paralympics as they target a fifth straight gold in Tokyo.

The nation that gave the world the «jogo bonito» beautiful game has just as much panache in five-a-side, which is played by athletes with visual impairments.

Brazil have won gold at every Paralympics since the sport debuted in 2004, and boast arguably its greatest player in Jefinho — known as the «Paralympic Pele».

They started their campaign in Tokyo with a 3-0 win over China on Sunday, before beating Japan 4-0 a day later.

«Football is in the blood of Brazilians — this is a big pressure, because the Brazilian people always expect to win,» captain Ricardinho told AFP.

«The Brazilian people expect results because we have the potential to be champions. If no one expected anything of us, it would be very bad.»

Paralympic five-a-side is played with teams of four visually impaired outfield players, who wear blackout eyeshades, and a fully or partially sighted goalkeeper, who cannot leave his penalty area.

The ball contains a rattle so the players can hear where it is, and teams have two fully sighted coaches who give directions from beside the goal and behind the boards that surround the pitch.

Brazil’s Luan says his role is about more than just keeping the ball out of the net.

«About 50 percent of the goalkeeper’s job is organising the defence,» he said.

«We have to do this well so that the players can feel confident about their goalkeeper.»

The players’ close-control skills are immediately apparent, shuffling the ball from one foot to the other as they make their way around the 40-by-20-metre pitch.

Jefinho, who was born with glaucoma, began playing with a ball when he was young but lost his sight at the age of six.

He continued to play with his friends, wrapping the ball in a plastic bag so he could hear it rustling.

Now he is looking to win his fourth Paralympic gold in Tokyo, and he breaks into a wide grin when his name is mentioned in the same breath as Brazilian legend Pele.

«It’s sensational to be compared to the greatest footballer ever,» said the 31-year-old.

«He’s our reference — we always try to learn from him, on the pitch and off it. Being compared to Pele is a great feeling. I’m very happy about it.»

Brazil’s first goal of the tournament came from a direct free kick.

First, the team’s attacking coach provided some orientation by tapping both posts and the crossbar with a metal rod, and shouting from behind the centre of the goal.

Nonato then blasted the ball past the Chinese goalkeeper, before running back screaming to celebrate with his teammates.

«We’re very happy with the result,» Brazil’s Cassio said after the match.

«From the first second of the game, we knew what we wanted to do. China are one of the contenders for the gold medal — a very fast team — but we did a very good job today.»

But Brazil’s mission in Tokyo is far from finished.

Nothing less than gold will suffice for the world’s most successful team, and Cassio is aware of the expectations that come with representing his football-mad nation.

«It’s a great responsibility because of our history, and we’re conscious that our history is built on a lot of hard work and dedication,» he said.

«We’re just carrying on the legacy of everyone who played at the previous Paralympics. The results come when you do a good job.»