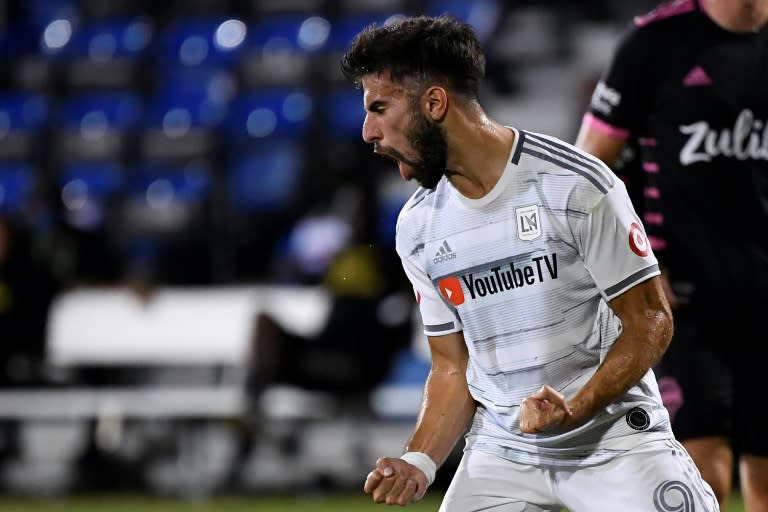 Miami (AFP) – Los Angeles FC coach Bob Bradley believes striker Diego Rossi can only get better as his team prepares for a quarter-final duel with Orlando at the Major League Soccer restart tournament on Friday.

Rossi scored twice in LAFC’s 4-1 rout of MLS Cup champions Seattle in the last 16 on Monday, taking his tally for the tournament to seven goals in four games with three assists.

It was the sort of display that LAFC had been banking on when they invested in the largely unknown Rossi in late 2017 ahead of the expansion club’s debut in Major League Soccer.

The Uruguayan striker, who is still only 22, is one of a crop of young South American players that Bradley has helped mould into one of Major League Soccer’s most exciting teams.

Speaking to reporters on Wednesday, Bradley said Rossi’s work ethic lay behind his MLS success, which has included 34 goals in 71 appearances for LAFC.

«He’s been a good player from the start. He’s worked hard on his finishing, you see the improvement there.

«In just a couple of years he’s gone from being a young player with speed, to being stronger and more relentless in the way he pushes things.

«We’ve worked with him from the start. It’s a credit to his growth as a player and his maturity. He’s an excellent, smart guy. He’s just been a really good guy to work with from the day he arrived.»

Rossi is supported by a similarly youthful contingent of South American players, which includes compatriots Brian Rodriguez (20) and Francisco Ginella (21).

Colombian duo Eduard Atuesta (23) and Eddie Segura (23) have also emerged as key members of the squad along with Ecuador’s Diego Palacios (21).

The proliferation of South American players in MLS reflects the increasing trend of teams who are inclined to look for young emerging talent rather than fading stars from European football.

«From the beginning we set out to find young talent from around the world,» Bradley said. «The young South American players that we have are really good guys. They love their football, they all get along very well.

«When you have young talent and the players see every day that you care about them, it creates a good atmosphere. All those players have contributed.

«(Rossi) has set a great example for others that when you come to LAFC its a great place to develop and be seen. That’s something that we’re very proud of.»

The South American contingent have helped Bradley implement an ambitious, attacking style of play that had always been his goal.

«There were discussions before I joined about how important it would be to have a club that connected with the city,» Bradley said.

«I felt strongly that we had to have a strong identity on the field, build a team that wasn’t afraid to go forward and push games, push the tempo.»

The «MLS is Back» tournament is taking place inside a «bubble» at Disney World in Florida following a four-month hiatus due to the coronavirus pandemic.

The quarter-finals get under way on Thursday with Philadelphia Union’s clash with Sporting Kansas City.