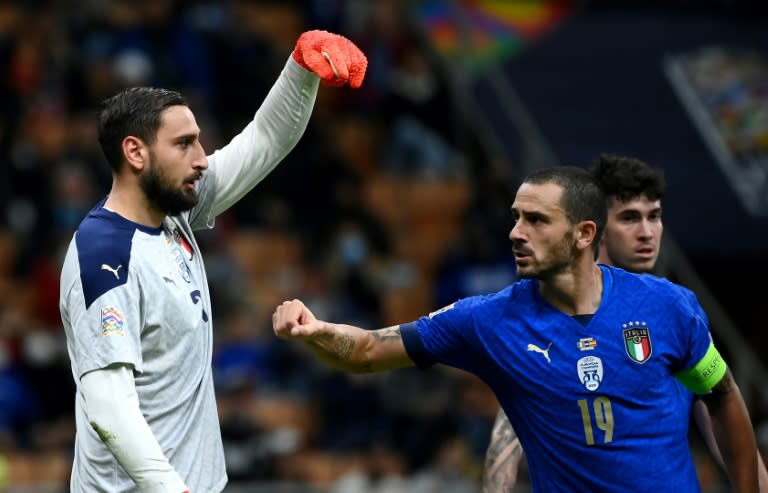 Leonardo Bonucci said Thursday that he wants Italy to forget the pain of failing to qualify for the last World Cup as the European champions prepare for a key match in the charge for next year’s tournament in Qatar.

Italy face Switzerland in Rome on Friday hoping for a return to international football’s biggest stage after their disastrous campaign for the 2018 World Cup, in which they lost in a play-off with Sweden to miss out for the first time in six decades.

But Bonucci says the Azzurri, who are ahead of the Swiss at the top of Group C on goal difference, need to play with the same joy which took them to Euro 2020 in the summer.

«The experience of 2017 has stayed with us, just like any positive or negative experience,» said Bonucci.

«They leave their mark but we need to look forward, experience it with the right level of pressure and not with any more worry than for the final at Wembley. We need to put some joy out on the pitch.»

Boosting Italy’s chances in their final two qualifying matches against Switzerland and Northern Ireland, who they face at Windsor Park on Monday, is the news Nicolo Barella is fit to play in midfield.

Barella went off midway through the second-half of last weekend’s Milan derby and was a doubt.

However, unlike captain Giorgio Chiellini and starting centre-forward Ciro Immobile has recovered in time for the two crucial matches.

Mancini added he was not sure who would replace Immobile up front, although Italian media report Andrea Belotti will start as striker.

«Regarding the forwards we still have training today and tomorrow, we are close to making a decision but we haven’t yet, and whatever decision we make isn’t going to change much anyway.»

Murat Yakin said Switzerland would «try to win», despite a raft of absences that has depleted his team’s attacking options on their return to the stadium where they were handed a 3-0 group stage cuffing by Italy in Euro 2020.

First choice striker Haris Seferovic and Borussia Moechengladbach forward Breel Embolo are both out of Friday’s match, which realistically Switzerland have to win if they want to qualify directly for the World Cup.

«We need to win if we want to go through, that’s clear,» said coach Yakin, who took charge of his national team after the Euro.

«Tomorrow how we play at the back will be crucial, but we will also need to take some risks because otherwise we’re not going to win.»