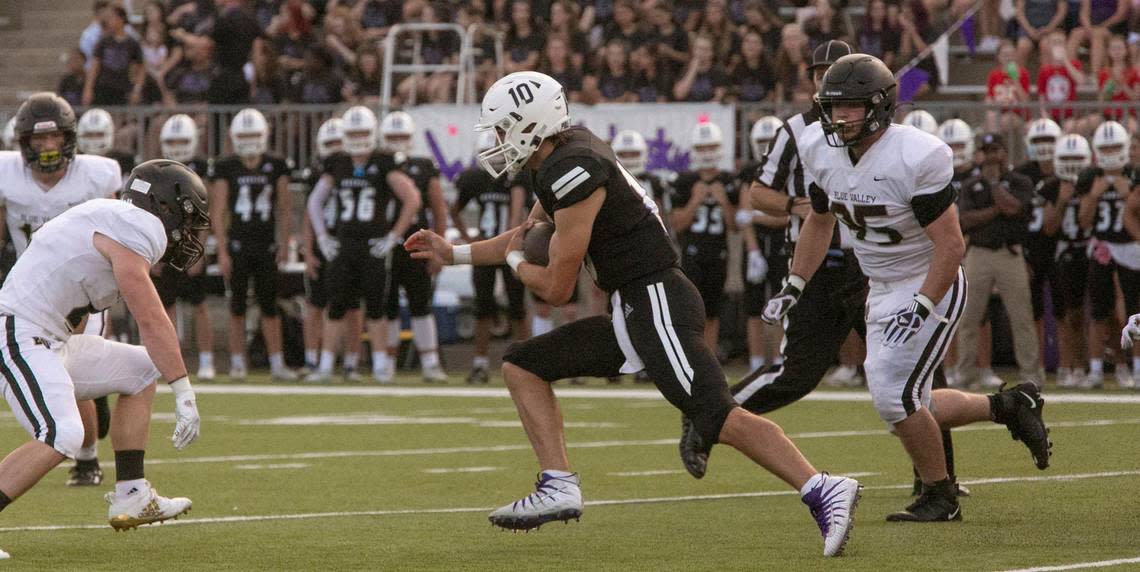 After a half-hour delay, Blue Valley scored 14 unanswered points in 5 minutes and tied the game.

But the Huskies showed their mettle by responding with an 80-yard touchdown drive.

The winning play was a 31-yard quarterback keeper by Blue Valley Northwest senior Mikey Pauley with 6:07 remaining, and it helped lift the Huskies to a ultimately turned out to be a 35-21 victory.

“This is the best feeling you could possibly have,” Pauley said. “There was a lot of talk from other people, saying who was better and who was not. We proved it tonight.”

BV Northwest Junior running back Grant Stubblefield put the finishing touch on the thrilling win with his third touchdown of the game, going 61 yards for the score.

“That was kind of a whirlwind,” BV Northwest coach Clint Rider said. “We knew either after halftime or after the delay they were going to be ready to go. We needed to make sure that we could withstand whatever was coming at us.

“It was kind of a tidal wave. I think in a lot of years that would have been a time we would fold, but not tonight.”

The Huskies needed to dig deep mentally after the way things changed stunningly fast in Blue Valley’s favor after the delay.

BV Northwest carried a 14-0 lead into halftime and didn’t even allow Blue Valley to cross midfield.

Early in the third quarter Blue Valley finally did get past midfield. It came on a 24-yard run by senior running back Michael Solomon that put the ball at the Huskies’ 30. Immediately after he was tackled, the game was delayed by lightning.

Play resumed 30 minutes later. Blue Valley picked up only 5 more yards and had to settle for a booming 42-yard field goal by senior Charlie Weinrich.

And that was just the start. Blue Valley quickly got a turnover and turned that into a 31-yard touchdown pass from senior quarterback Greyson Holbert to Andre Davis. It was going so good for the Tigers that a bobble on the extra point attempt turned into a successful two-point pass conversion.

About a minute later, Hayden Essex intercepted a pass, giving Blue Valley excellent field position at the Huskies’ 15. BV Northwest stood strong on defense. But Weinrich tied the game with a 37-yard field goal with 4:25 left in the third quarter.

“Our defense did a great job of not breaking,” Pauley said. “They held them to field goals. That picked up our offense and let us go down and do our thing. Defense had our backs big time.”

The Huskies regrouped and methodically marched down the field, capping the long drive with a 7-yard touchdown run by Stubblefield.

The response by the Huskies this time was a 79-yard drive, capped by Pauley’s second long touchdown run of the game.

“It felt like I wasn’t in my own body,” Pauley said of his long touchdown run.