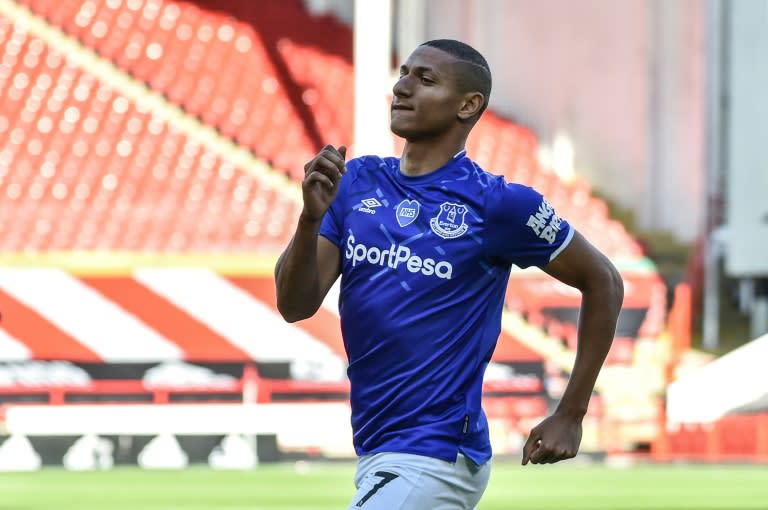 London (AFP) – Richarlison rocked Sheffield United’s bid to qualify for the Europa League on Monday after sealing a 1-0 win for Everton, while Brighton guaranteed their Premier League survival with a goalless draw against Newcastle.

The Blades were handed a second successive defeat as Brazil forward Richarlison struck early in the second half at Bramall Lane.

United’s hopes of capping a memorable first season back in the Premier League with a Europa League berth will be over if Wolves beat the Eagles.

«I’m disappointed for the players today. But what you try and do in a season is get your club to overachieve and we have ridiculously overachieved,» Wilder said.

«Top six should never have been in the equation from the minute we set foot into the division. There are a lot of clubs that would swap places with us.»

The teams who finish fifth and sixth are certain to reach next season’s Europa League.

If the FA Cup winners finish in the top six, then seventh place would also qualify for the Europa League.

Arsenal, who face third-placed Chelsea in the FA Cup final, are currently 10th.

Everton striker Dominic Calvert-Lewin went closest to breaking the deadlock in the first half as his header struck a post.

Carlo Ancelotti’s team won it in the 46th minute when Richarlison met Gylfi Sigurdsson’s free-kick with a glancing header for his 15th goal of the season.

At the Amex Stadium, Brighton got the point they needed to be mathematically certain of avoiding relegation.

Graham Potter’s side were already virtually certain to stay up before the match because their goal difference is far superior to third-from-bottom Aston Villa — the only team in the relegation zone who could have caught them.

Brighton have won just two of their last 17 league games, but ending a run of three successive home defeats moves them seven points clear of the bottom three, with Villa having just two games left.

«At this stage of the season we can talk about performances but it’s about getting the points you need,» Potter said.

«It’s been a unique season in what we’ve had to deal with. It’s been a challenge.

«We’ve come through. Job done. I’m very proud to be in the Premier League next season.»

Newcastle had just one fit centre-back after a host of injuries decimated Steve Bruce’s defensive options.

Brighton looked to test out Newcastle’s make-shift rearguard, but Lewis Dunk headed over before Leandro Trossard blasted his free-kick high and wide.

Newcastle’s frailties at the back were on full display when Emil Krafth failed to clear properly and then slipped over in his own area.

Neal Maupay stole possession but let Newcastle off the hook with a wayward finish before Trossard brought a good save from Martin Dubravka.