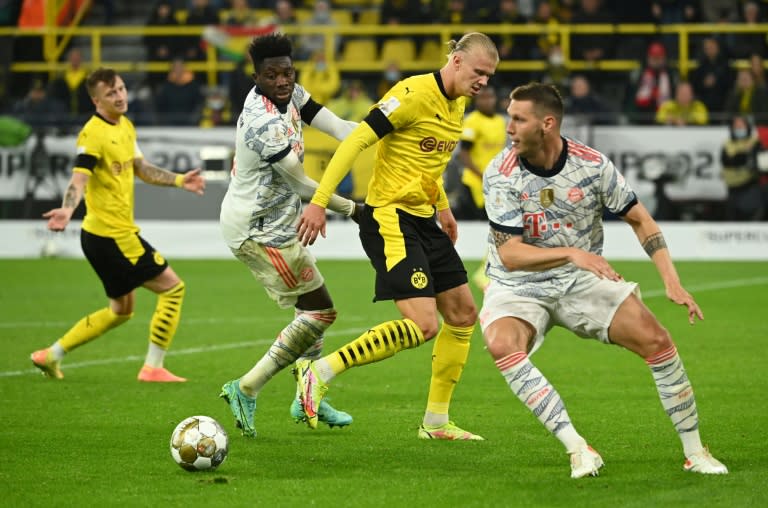 The pressure was on Suele and Upamecano to forge a partnership after the departures of double Champions League winners Jerome Boateng and David Alaba. With France defender Lucas Hernandez sidelined by injury, Suele and Upamecano – who the German media dub ‘Suelemecano’ – have found their feet.

Haaland had netted five goals in his two previous games before he was subdued by the Munich defence on Tuesday when Bayern won 3-1 at Dortmund to lift the German Super Cup.

Bayern’s attack shone with Robert Lewandowksi scoring twice against his former club, while the defence restricted Haaland to one disallowed goal.

Having wobbled on occasion in last Friday’s 1-1 draw at Moenchengladbach, the duo earned praise from Bayern coach Julian Nagelsmann after victory at Dortmund.

«We defended very well and were very aggressive. Niki and ‘Upa’ were very stable in the back four. It was a step forward for both of them,» said Nagelsmann.

Extra focus could fall on the pair at home this Sunday as Bayern goalkeeper Manuel Neuer struggles with an ankle Knock.

«We played great, with courage and with heart,» Upamecano said after victory in Dortmund.

Suele is out of contract next June and was criticised last season for his fitness and form.

He admitted it was a relief to clicked with Upamecano in Dortmund after they both made mistakes at Gladbach.

«It wasn’t easy in pre-season, everything had to be established from scratch,» said a relieved Suele.

On Saturday, Dortmund look to bounce back from defeat to Bayern away to Freiburg, whose new signing Maximilian Eggestein could make his debut for the hosts.

The central midfielder was signed for five million euros on Wednesday from second division club Bremen.

One to watch: Marcel Sabitzer

The RB Leipzig captain has been linked to Bayern Munich and started on the bench in last Sunday’s shock 1-0 defeat at Mainz.

Sabitzer has matured into one of the Bundesliga’s best playmakers and is versatile enough to feature as an attacking, central or defensive midfielder.

Stuttgart have matured into a tough side to beat under their New Jersey-born head coach Pellegrino Matarazzo and Marsch needs a confidence-boosting win over his American compatriot.

One – when Leipzig host Stuttgart, it will be the first time two American head coaches will be on rival sides in Bundesliga history.

Seven – consecutive wins for Bayern in recent games against Cologne, who have scored just four goals in the series to Munich’s 22.

14 – the goals Lewandowski has scored in 14 wins and one draw against Cologne. The Poland striker has never lost to Cologne for either Bayern or ex-club Dortmund.

Fixtures (all times 1330GMT unless stated)