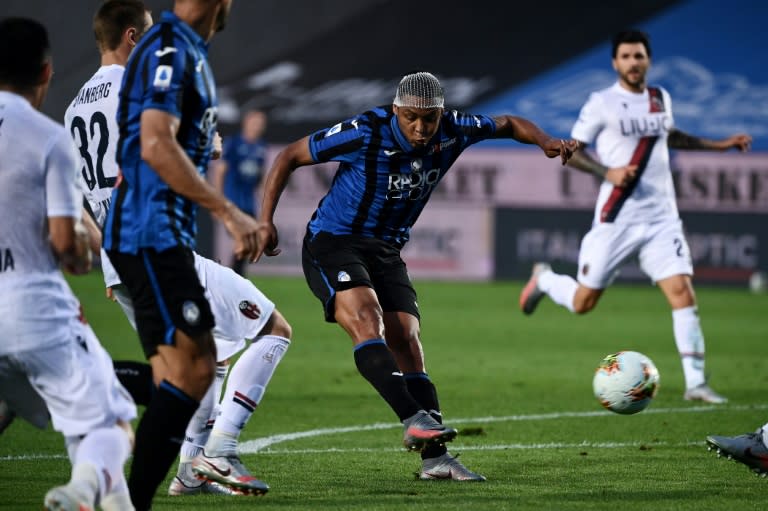 Milan (AFP) – Luis Muriel came off the bench to score the only goal as Atalanta beat Bologna 1-0 in a fiery Serie A clash on Tuesday to move back second behind leaders Juventus.

Muriel struck just after an hour as Atalanta extended their unbeaten run to 15 games to move six points behind Juventus, and two ahead of third-placed Inter Milan.

Swedish star Zlatan Ibrahimovic turned back the clock with a double as AC Milan beat 10-man 2-1 Sassuolo to move fifth ahead of Roma and Napoli and into the Europa League berths.

Atalanta had won six successive games since the league resumed after the coronavirus lockdown before drawing 2-2 with Juventus, and were held 1-1 at Verona last time out.

The Bergamo side have 74 points this season with three games to play, overtaking their previous best haul of 72 during the 2016-17 season.

Atalanta coach Gian Piero Gasperini was banished from the sidelines after a spat with counterpart Sinisa Mihajlovic before the break, with the Bologna boss receiving a yellow card.

It was the second red card in recent weeks for Gasperini who has been showing signs of frayed nerves before his side meet Paris Saint-Germain in the Champions League last eight next month.

«I didn’t deserve to be expelled,» fumed Gasperini afterwards. «But let’s talk about the match.

«We’re looking for consistency on the pitch, then we’ll have 12 days later to choose what kind of work to do to prepare for the Champions League.»

Bologna, in tenth, battled after their 5-1 defeat against AC Milan last time out with Musa Barrow missing a double chance against his parent side.

Muriel came off the bench after the break and picked up a cross from fellow Colombian Duvan Zapata to score his 18th goal this season and 11th off the bench.

Juventus can seal the title with a win over 16th-placed Udinese, but it depends on Inter Milan, who are eight points behind the champions, failing to beat Fiorentina at the San Siro on Wednesday.

Outside the Champions League places, Stefano Pioli’s Milan extended their unbeaten run since the return with a seventh win in nine games.

«I was already seeing the team improve before the lockdown, then we grew a lot,» said Pioli, who has been given a two-year contract extension with the club until June 2022.

«We’re doing good things, but it is not over yet,» added Ibrahimovic.

«We are still in the running to reach our goal. Fifth place is what we want, but the qualifiers are fine too.»

Ibrahimovic nodded in Hakan Calhanoglu’s cross after 19 minutes and added a second just before the break.

The 38-year-old, who helped Milan to their last Serie A title back in 2011, savoured scoring more than one goal in a Serie A game for the first time in eight years.

Francesco Caputo had equalised for the hosts from the penalty spot, after a Calhanoglu handball, for his 19th goal this season.

But Sassuolo played the second half a man down after Mehdi Bourabia was sent off for a foul on Ante Rebic, ending their nine-match unbeaten run.

Milan goalkeeper Gianluigi Donnarumma took over the captain’s armband after an injury to Alessio Romagnoli as the 21-year-old marked his 200th game for the club.