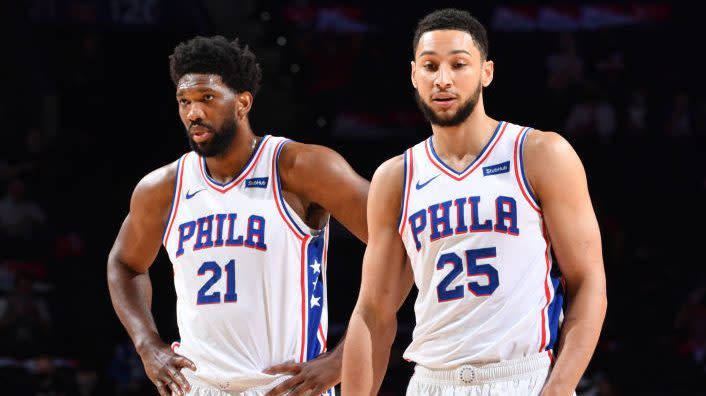 It feels like this bridge has been burned… except both sides may need to repair it if no acceptable trade is found.

There were already reports that the 76ers organization could not reach Ben Simmons, and now comes Jason Dumas of KRON 4 and Bleacher Report echoing that idea.

We all have a pretty good idea why Simmons is not responding to Embiid.

Both the 76ers and Simmons’ agent (Rich Paul of Klutch Sports) are looking for a trade, but there isn’t one out there right now. At least at the price 76ers’ GM Daryl Morey is asking (he has a reputation of starting ridiculously high in his trade asking prices before coming down to something where a deal can be struck). He reportedly is asking for an All-Star level player plus “control” over four first-round draft picks.

If not, the buzz around the league is Morey is happy to run it back until the offers improve.

Dumas is not the first to report Simmons likes the idea of Golden State. Those sides talked before the NBA draft and Morey reportedly asked for Andrew Wiggins, James Wiseman, the No. 7 and No. 14 picks in this past draft, plus two future first-round picks. The Warriors obviously shot that down (as they should have). If and where negotiations went from there is unknown, but we do know no deal was struck.

From the Warriors’ perspective, how do you play Draymond Green and Ben Simmons together on offense? While both can pass, the two of them together would destroy any floor spacing, even with Stephen Curry and Klay Thompson.

Other potential landing spots for Simmons have faded. Washington traded Russell Westbrook and now Bradley Beal seems happy and wants to stay put. Miami made its all-in move by trading for Kyle Lowry. Damian Lillard has not asked for a trade out of Portland (yet), and sources have told NBC Sports to expect him to start the season as a Trail Blazer. Morey doesn’t seem enthralled by a Pascal Siakam-based trade package out of Toronto.

All that leaves Simmons and the 76ers needing to rebuild a bridge. For now. Eventually, a Simmons trade will happen if he wants it to, but he has four fully-guaranteed seasons left on his contract, limiting Simmons’ leverage and allowing Morey to be patient.

Simmons and the Sixers may not be talking right now, but they will need to be soon.

Check out the latest on the 76ers

Another report Ben Simmons not talking to Embiid, 76ers; interested in Warriors originally appeared on NBCSports.com