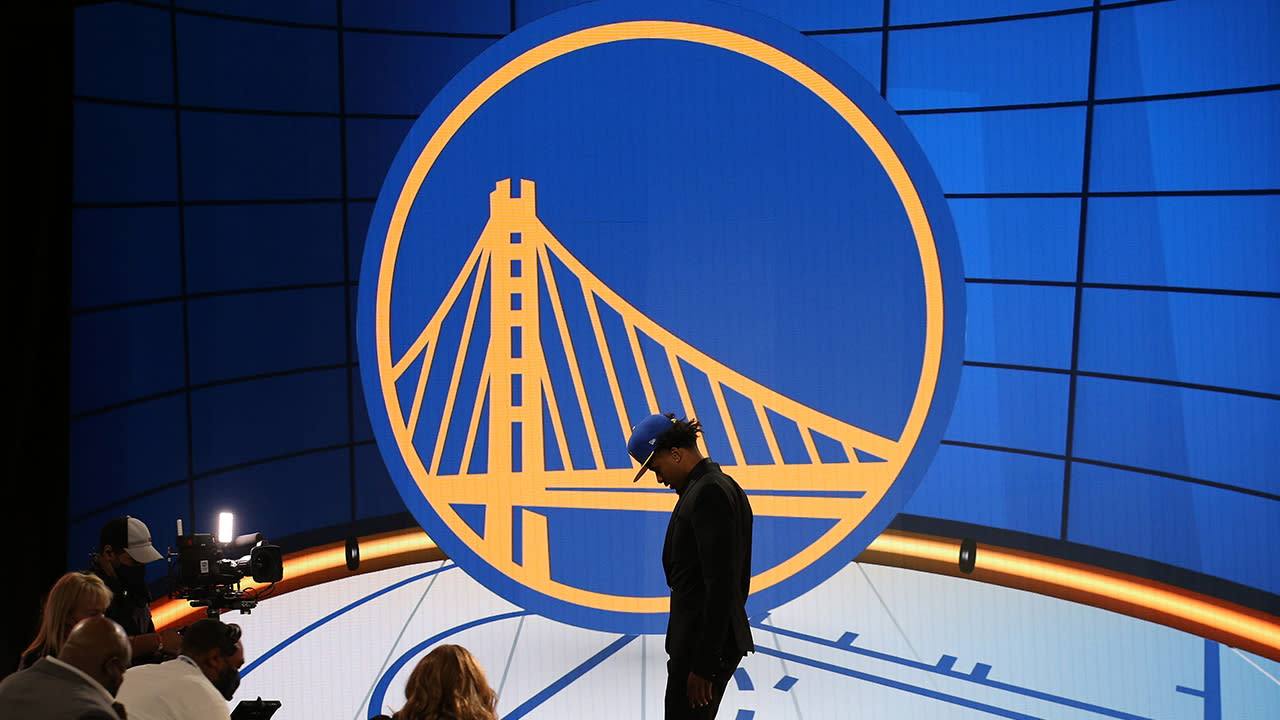 As they went to bed Thursday night, the Warriors’ roster was no closer to winning an NBA championship in 2022 than they were when they woke up Thursday morning.

So much, or so it seems, for leveraging two lottery picks into a flash retool that puts them back among the league’s elite.

In coming away from the 2021 NBA draft with Kuminga (No. 7 overall pick) and Moody (No. 14), the Warriors either anticipate packaging at least one of the youngsters in a trade that yields a veteran star – or they’ve decided to spin out of the present and toward the future.

Golden State has more tradeable assets today than yesterday, but if the post-draft comments of team president Bob Myers are any indication, the Warriors are less inclined to deal now than they were a few days ago.

Which is contrary to their thinking a couple months ago, when it was evident throughout the league that the Warriors were dangling the draft picks as bait to acquire a veteran impact player ready to win now.

“I do know we need veterans,” Myers said in May, after the Warriors finished the regular season 39-33 and then lost two play-in games.

Though Myers acknowledged that he “probably talked to every team in the league,” the events of Thursday are evidence that the dialogue went nowhere.

Kuminga is one of the most intriguing players in the draft. A gifted athlete, he’s a fraction shy of 6-foot-8 with a 7-foot wingspan. He posted decent numbers for the G League Ignite, averaging 15.8 points, 7.2 rebounds and 2.7 assists over a total of 13 games.

“I have the most and the highest ceiling in this draft,” Kuminga said, echoing pre-draft chatter contending as much.

Indeed, nothing about Kuminga, who left the Democratic Republic of the Congo for America five years ago, is more impressive than his potential. Evaluators generally project the possibility of greatness at both ends while acknowledging there is a vast territory between where he is now, and the heights he might someday reach. He is, by consensus, an alluring project.

As was teenage Giannis Antetokounmpo, who evolved into a two-time MVP.

As was teenage Bismack Biyambo, the Congolese big man taken No. 7 overall pick in 2011, who has spent 10 seasons as a part-time starter with three different NBA teams.

No matter what Myers says, Kuminga’s current value to the Warriors is highest in trade talks. Plenty of teams like him, and if one wants him enough to trigger a deal that brings an effective vet to the Bay, choosing the youngster at No. 7 was a touch of genius.

If Kuminga is on the roster in October, though, he likely will be bound for the Santa Cruz Warriors and a second consecutive season in the G League. In any case, he’ll be behind Moody, who was projected to go as high as No. 7.

Moody is more polished than Kuminga, perhaps because he played top-level high school ball for four years – the last two at the powerhouse Montverde Academy in Florida. He also was part of a strong AAU squad. All before his lone season at the University of Arkansas.

“I feel like can I get in and have a good place with the team that they have now and really contribute as soon as possible,” Moody said.  “But I’m willing to wait and develop as much as they need me to.”

To hear Myers tell it, the draft moves met with the approval of at least one core member. He was in communication with Draymond.

“He texted me after the third or fourth pick and said, ‘Kuminga,’ Myers said of Green.“And at about the ninth pick he said, “Moody.”

By the time Kuminga and Moody are seasoned, productive NBA players, assuming they become that, Draymond will be in his mid-30s. So will Thompson. Curry will be entering his late 30s.

No prized vet incoming, no rings in sight.

For even if the Warriors find a rotation player in free agency – and it’s hard to imagine much more, given their financial constraints – there is no reasonable hope of a championship in 2022.

Regardless of whether Klay returns and finds his rhythm by January, the roster they took into Friday morning has too many kids, and is too raw to play at a championship level.