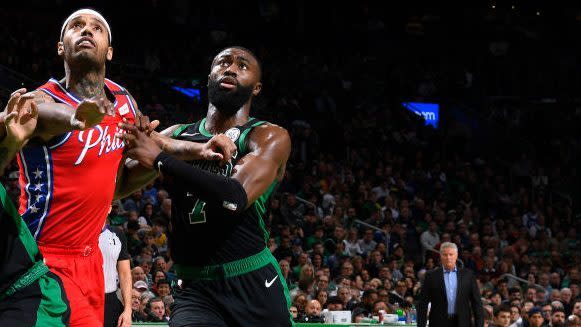 The NBA approved a list of social-justice messages players can wear on their jerseys:

They gave us some names and phrases to put on the back of jerseys,” Scott said. “That was terrible. It was a bad list, bad choice. They didn’t give players a chance to voice their opinion on it. They just gave us a list to pick from. That was bad. That’s terrible. Just voice your opinion, how you feel.

“I would like to see — because I think it can still happen — more options available to put on the back of our jerseys,” Brown said Monday in a video conference with reporters. “We understand anything vulgar our league doesn’t necessarily represent, but for histories and causes such as now, I think that that list is an example of a form of limitation. I think we should be able to express our struggle just a little bit more.

” … I was very disappointed in the list that was agreed to. I think things were tried and attempts were made to add to that list, but the NBA agreed that that list was satisfactory. Hopefully we can get some more names on that list.”

“Maybe ‘Break the Cycle,’ ‘Results’ — that’s what everybody is really playing for — ‘Inequality by Design,’ ” Brown said, “things like that I think may have a deeper impact than some of the things that were given to us. I think it was a little bit limiting.”

As far as Scott’s complaint about players not having a voice in the list, the plan was presented as developed in conjunction with the National Basketball Players Association. Perhaps, this is another example of union leadership not being on the same page as its members. But to be fair, it’s difficult to satisfy everyone. Scott and Brown don’t necessarily speak for players en masse.

Of course the NBA – a multi-billion-dollar company – was going to allow only sanitized phrases. The middle has shifted, but not enough for mainstream support for a sharp criticism like Brown’s “Inequality by Design.” (He’s right, though.) The NBA doesn’t want too much controversy.

However, simply by operating, the league gives players platforms and resources .

Nobody should have expected these jersey messages to be the primary means of change. They’re fine and can help draw attention.

But players can do more outside the league’s formal structure, including speaking up in interviews – like Scott and Brown did today.

76ers’ Mike Scott on social-justice messages on NBA jerseys: ‘That was terrible. It was a bad list’ originally appeared on NBCSports.com